Investigators at the crash site said on Monday they had recovered both the aircraft’s flight data recorders.

Officials from the US National Transportation Safety Board were also heading to Thailand to assist with the inquiry.

Most of the passengers on board the aircraft, a McDonnell Douglas MD-82, were holidaymakers headed for the popular beach resorts on Phuket.

The bodies of the dead, many badly burned, have been laid out in a temporary morgue in the airport terminal with no space for them in local hospitals.

Among the survivors were 14 Thais, eight Britons, five Iranians and four Germans.

Vorapot Rajsima, Phuket’s deputy governor, said five surviviors were in critical condition after suffering burns to 60 per cent of their bodies.

Among the less seriously injured survivors, many spoke of atrocious weather conditions as the aircraft prepared to land, with torrential rain and strong winds lashing the coastal airstrip.

Several reported the plane hitting turbulence coming into land before banking sharply left as the pilot apparently tried to abort the landing.

As it turned, the aircraft’s left wing struck treetops, bringing it crashing to the ground and bursting into flames.

“The plane was flying around trying to land. It was making some noises and it was bad rain,” John Gerard O’Donnell, an Irish survivor, told Thailand‘s ITV channel.

“You can tell it was in trouble, because it kind of landed then came up again the second time.”

Nong Khaonual, a Thai survivor, said: “Just before we touched the runway we felt the plane try to lift up, and it skidded off the runway.”

He told Thailand‘s Nation Television of the desperate struggle to escape with some passengers trapped and on fire.

“My wife was half conscious and I dragged her out of the emergency exit. There was a man behind us and he was on fire.”

Survivors said fire quickly broke out and engulfed the aircraft fuselage, filling it with thick smoke.

“The guy behind me was kicking at the window. He kept kicking and kicking the window or the door, whatever it was, but it wasn’t loosening,” she told Reuters from her hospital bed.

“If it hadn’t opened we would have died. It was dark and smokey. I felt like I was going to pass out.”

The crash is likely to raise safety questions for the dozens of budget carriers that have sprung up across Asia in the last decade.

None of Thailand‘s budget carriers has suffered a serious crash, but a spate of incidents in Indonesia in particular has raised concerns.

In Bangkok, a top airline executive expressed regret over Sunday’s crash as distraught relatives and tour agency representatives pored over the passenger list.

“I’m deeply sorry about this tragic event,” he said.

“Tomorrow the police will set up an investigating committee to find out what actually caused the accident. What we need to do right now is take care of the injured.” 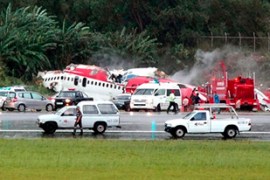 Toll in airliner crash at Phuket airport rises to 88. 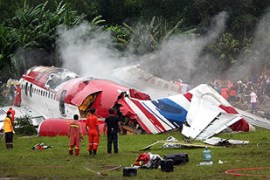