“What already has been said does not need to be repeated,” Uribe told local radio in Rionegro, Colombia, referring to earlier refusals to let Chavez meet Farc leaders in the country.
“Don’t ask me to talk about these things publicly… You already know my position on that,” he told reporters.
Intermediary
Chavez has cast himself as an intermediary between Uribe and Farc by trying to negotiate the release of 45 hostages held by the left-wing group.
In exchange for the release of those hostages Farc has demanded the release of hundreds of their own members held by Colombian authorities.
Among the people being held by Farc is Ingrid Betancourt, a dual nationality French-Colombian politician who was seized in 2002 while campaigning for the Colombian presidential election.
Chavez’s proposal to meet Farc’s leader is his first attempt to mediate in Colombia’s long-running conflict.
He was initially invited by Piedad Cordoba, a Colombian senator, to facilitate dialogue between the Colombian government and Farc.
Cordoba’s invitation was later accepted by Uribe but his administration remains wary of allowing Chavez to meet Farc members on Colombian soil.
Contact difficulties
Chavez indicated on Friday that he had received a message from Marulanda but did not refer to its content.
The Venezuelan leader says he is effectively channelling communication between Marulanda and Uribe but that his role is hampered without a direct line to the Farc chief.
“Marulanda doesn’t have a telephone. I can’t call him like I do Uribe,” Chavez said to his supporters, adding that he cannot reach the rebel leader by fax or e-mail.
Uribe has held a tough line on Farc during his term and has consistently said that no Colombian territory would be demilitarised to facilitate negotiations with the group.
The government of his predecessor, Andres Pastrana, demilitarised parts of the country in an effort to start peace talks.
Farc’s campaign against the Colombian government is the longest-running rebel uprising in Latin America.
Source: News Agencies 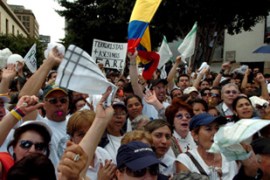 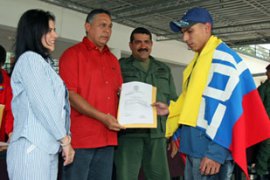 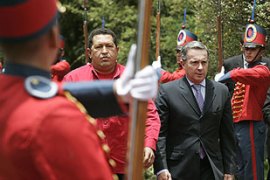 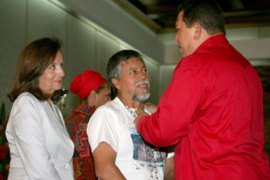