Seismologists said they expect the aftershocks to continue for some time.

The quake hit near the city of Bengkulu in western Sumatra, home to about 300,000 people.

“The North Bengkulu area has been identified as the worst hit with half the area destroyed,” Rustam Pakaya, head of the health ministry’s crisis centre in Jakarta, told Reuters.

“Many hospitals, houses, government buildings and clinics have been destroyed.”

The quake is also reported to have caused widespread damage in the city of Padang.

“Many are still trapped underneath the rubble from last night’s quake,” Fauzi Bahar, the mayor of Padang, said on Thursday.

Emergency services are working as fast as possible to reach people who may be trapped under collapsed buildings, but say the scale of the casualties is not yet clear. 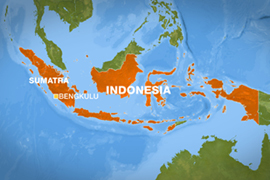 Many of the injured were being treated in the open air amid fears that further tremors may bring down weakened hospital buildings.

The aftershocks on Thursday morning came as rescue teams from elsewhere in Indonesia prepared to deploy to the area in response to the first quake.

Rescue officials in Jakarta have told Al Jazeera that with communications difficult and power cut in the quake area, a clear picture of the damage and numbers of casualties has yet to emerge.

A health ministry crisis centre official in Jakarta said rescue workers as well as supplies of emergency food and medicine and food were being flown into the area.

The military will also be mobilised for rescue and relief work, a presidential aide said.

On Wednesday evening hundreds of people fled their homes when the first quake struck just after 6pm local time (1100 GMT).

The epicentre of the first quake was about 100km southwest of Bengkulu.

Residents ran for higher ground as buildings collapsed in Padang, the capital of West Sumatra, and the town of Mukomuko, 300km from the quake’s epicentre.

Officials said buildings along Sumatra‘s coast sustained extensive damage, some of them with people trapped inside.

Tsunami warnings were issued by countries around the Indian Ocean, and later withdrawn following the first quake on Wednesday.

The warnings were reinstated when powerful aftershocks hit on Thursday morning.

The alerts have triggered fears of a repeat of the December 2004 tsunami that killed more than 250,000 in 12 countries.

The tremors were also felt in neighbouring Singapore where people ran out of high-rise office and apartment blocks.

David Oppenheimer, a scientist with the US Geological Survey, said a magnitude eight earthquake usually leads to partial collapse and shifting of buildings off their foundations.

“That’s the kind of stuff that causes death, especially in the Third World,” he told Reuters.

Indonesia, the world’s largest archipelago, is located on the so-called Pacific “Ring of Fire,” an arc of volcanoes and fault lines encircling the Pacific Basin, and is prone to earthquakes.