Barman said: “The army is working overtime in the affected areas and we have kept on standby Indian air force helicopters to carry out relief and rescue.”
‘Worst’ flooding
Describing the flooding as “one of the worst in recent years”, Barman said: “Most of the displaced people are now lodged at makeshift shelters in schools and offices, as well as on raised embankments.”
The Assam government says 54 people have died in this summer’s flooding. Across India more than 2,500 people have died, over a quarter of them in Bihar state, according to official figures.
In Bangladesh, farmers had to abandon their homes again, sheltering on higher land and in schools as rivers burst their banks.
Vast tracts of land became submerged in 25 out of the country’s 64 districts, Mohsena Ferdousi, a government spokeswoman, said.
“Most of these people had just returned home to pull their life together,” she said.
The toll since the start of monsoon rains in June is 966, including deaths from water-borne sickness, snake bites and landslides as well as drowning.
At least 10.5 million people were displaced or marooned in the first spell of flooding.
The country’s flood centre said two major Himalayan rivers that empty into the Bay of Bengal through Bangladesh – the Brahmaputra and the Ganges – had risen alarmingly in tandem.
Source : News Agencies 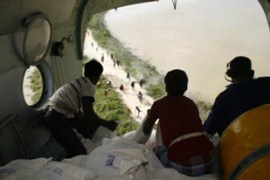 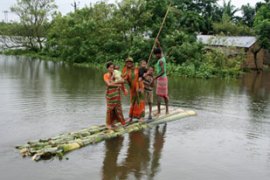