The defence team claims that Noriega, who was declared a prisoner of war (PoW) when he was tried in the early 1990s, is protected under the Geneva Conventions.

The lawyers initially tried to block his extradition to France, claiming the conventions stipulate PoWs must be repatriated immediately upon completing their sentence.

After Hoeveler ruled against Noriega, the lawyers filed a renewed petition, claiming France would not grant the general the PoW status to which they say he is entitled.

The judge rejected the petition on Friday, saying he was satisfied with US assurances that France would give Noriega the same treatment he was afforded in the United States, even though Paris does not consider him a PoW.

A French court sentenced Noriega, 73, in absentia to 10 years in prison for money laundering in 1999.

French authorities have said he would be given a new trial on the charges that he deposited $3.15m in cocaine trafficking profits in French bank accounts in the 1980s.

Noriega is also wanted in Panama for his role in the disappearance and murder of opposition members.

Carlos Guzman Jr, the son of a Panamanian activist shot and killed while taking part in a protest march against Noriega in 1987, said: “Noriega did a lot of harm to this nation and we should ensure he faces justice here.

“As a nation, it’s important that we face this challenge, to evade it will cost us dearly in the future.”

When Noriega ruled Panama, he ordered the murder of at least six of his own officers, and the decapitation of opponent Hugo Spadafora, according to a Panamanian court that sentenced him in absentia.

While those charges are far more serious than the ones he faces in France, his lawyers expressed certainty he would win a trial at home.

The lawyers have also dismissed suggestions their client would resume involvement in politics in Panama, but say the prospect of his return has unsettled some members of the Central American country’s government.

“Some say it is because he knows too much,” Lucia Newman, Al Jazeera’s correspondent in Panama, said.

“When Noriega was taken from [Panama City] by US forces, he took with him a gold mine of information about people who today are in high places in the Panamanian government.”

Many former allies of Noriega are in the government of Martin Torrijos, the president, including the housing minister, the interior minister – a former Colonel – and the minister of public works – formerly the head of Noriega’s “Dignity Battalions”.

Mario Rognoni, a former aide of Noriega, said: “He knows everything. He was head of intelligence for Panama for practically 20 years.”

While Panama has called for Noriega’s repatriation, it did not take legal action to block the French extradition request.

In court documents, the lawyers suggested France may have agreed to take Noriega off the Central American country’s hands “as a quid pro quo for a $300m contract to sell high-speed trains to Panama”.

Noriega ruled Panama from 1984 until he surrendered on January 3, 1990 to US troops, three weeks after the start of a military invasion.

A US Cold War ally and a onetime CIA informer whose involvement with drug trafficking eventually became an embarrassment for Washington, Noriega was tried on charges of drug trafficking, money laundering and racketeering.

He was sentenced to 40 years but the sentence was later reduced. 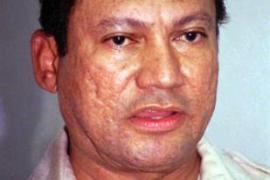 US rules Noriega can be extradited

Former Panamanain leader may be sent to France once he completes his prison term.