At least 20 Palestinians were wounded as Executive Force members – armed with batons and stun grenades and firing into the air – dispersed hundreds of people across Gaza.
Sunday’s general strike is the first since Hamas gained power three months ago.
The move marks the latest escalation between Mahmoud Abbas, the Palestinian president and Fatah leader, and the leadership of Hamas, Fatah’s rival.
Shops closed
Most shops were closed in the Rimal neighbourhood, a usually bustling marketplace, and noticeably fewer people were out on the streets.
In Gaza’s largest market, all but a handful of fruit and vegetable shops and stalls were closed while Gaza City municipal employees stayed home in protest.
The Al-Azhar, Al-Quds and Al-Aqsa universities were also closed, as were the majority of state schools in the Gaza Strip.

However, schools operated by the UN Relief and Works Agency for Palestinian refugees (UNRWA) remained open.

At Shifa hospital, the territory’s largest medical facility, only the emergency services were working.
One doctor at the hospital, a Fatah member, said he feared reprisals.
The hospital has witnessed several work slowdowns in recent months, as staff members protested against a move by Hamas to fire senior administrators who are members of Fatah.
“Doctors at hospitals, especially Shifa … have stopped work and answered the call to strike,” the medic, who preferred anonymity, said.
Hamas defiant
Hamas, which says it is imposing order in Gaza after months of chaos, shrugged off Sunday’s strike.
“Businesses are functioning normally in the cities of the Gaza Strip, and the education system is functioning as usual except for some schools here and there which are preventing classes from taking place by illegally closing their doors,” Sami Abu Zuhri, a Hamas spokesman, said. 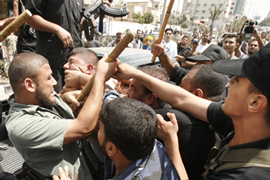 “The strike did not succeed and shows the failure of the new methods used by the Palestinian Authority leadership to try and weaken Hamas.”

On the other hand, Kayed al-Ghoul, a Popular Front for the Liberation of Palestine [PFLP] leader, told Al Jazeera that the strike was an attempt to bring Hamas back into the democratic Palestinian national movement.
“We have recently witnessed attempts to impose the ideology of a particular party that sees nothing right in any parties’ opinions other than its own.
“Last Friday, democracy was attacked … the acceptance of other was violated.
“We want to reinforce democracy, multiplicity, respect for other opinions, freedom of expression and the use of peaceful means to express one’s positions.”
Source: News Agencies 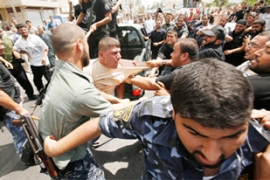 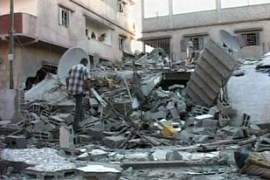 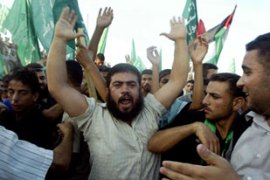