“National reconciliation is the way to resolve the crisis,” shouted many in the rally on Sunday organised by the country’s main trade union.
The Salafist Group for Preaching and Combat (GSPC), an offshoot of al-Qaeda Organisation in the Islamic Maghreb, has said in an internet statement that it was behind both attacks.

However, Abassi Madani, head of the front, said in a statement that what was happening in Algeria proved that the country’s crisis was going to get worse as long as its main causes were not seriously addressed.

Twin bombings
Saturday’s suicide lorry bombing at a coast guard barracks east of Algiers was preceded by an attack in the town of Batna less than 48 hours earlier.
A lorry packed with 800kg of explosives was used in the second bombing, which took place in the port of Dellys, 100km east of Algiers, it said.
The blast destroyed the barracks, killing 37 people, hospital sources said.

The first attack on Thursday was intended to target Abdelaziz Bouteflika, the Algerian president, according to the GSPC web statement.

The bomber in Batna, 430km southeast of Algiers, was forced to detonate his device prematurely after being discovered shortly before Bouteflika’s visit.
The explosion left 20 people dead and dozens more wounded.
The GSPC statement, whose authenticity could not be verified, said two al-Qaeda fighters carried out the attacks “in defence of Islam and the Islamic nation”.
Violence broke out in Algeria in 1992 after military-backed authorities scrapped elections that an Islamist party was set to win.
Up to 200,000 people are estimated to have been killed in that conflict.
Egyptian rescued
In a related development, Algerian security forces said on Sunday they had freed an Egyptian telecoms engineer held hostage by Muslim fighters for four months.
Amjed Wahba, an engineer with Egypt’s Orascom Telecom, was freed  on Thursday and apart from being traumatised was in “satisfactory” health, a statement said.
Wahba was kidnapped on May 28 near Tizi-Ouzou in the Kabylie  region east of Algiers.
His captors are also believed to have links to al-Qaeda Organisation in the Islamic Maghreb.
Source : Al Jazeera, News Agencies 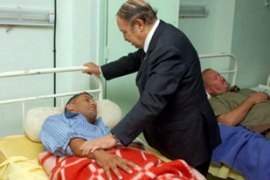 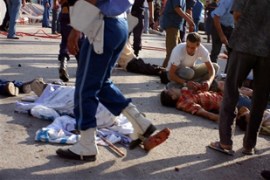 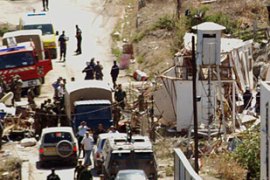