Prosecutors accused the couple of negligence and greed for failing to evacuate residents, saying that they did not heed government warnings and did not want to spend money on transport.

But defence lawyers said the Manganos, who stayed at the nursing home during the storm, did not think floodwaters would reach the building and believed their residents were too frail to move.

They blamed local and federal governments for building poorly constructed levees that allowed the floodwaters in and for failing to adequately warn of the storm’s dangers. No mandatory evacuation order was given by the authorities, they said.

John Reed, a defence lawyer, said in closing arguments that the government failed “woefully and horribly” in “its duties to keep us safe and its duty to warn us of the danger that was there”.

After the verdict, Reed said: “I’m grateful that this lengthy ordeal for Sal and Mabel is over. These are two good-hearted and hard-working people who did not deserve what was visited upon them by the state of Louisiana.”

In a statement, he described the Manganos as “happy beyond description,” but would not say if they planned to reopen their business.

The Manganos still face a number of lawsuits filed by relatives of the victims.

Prosecutor Paul Knight told reporters: “It’s our job to see that the victims are given a chance, that justice was given a chance. This jury has spoken.”

The Manganos’ nursing home is in St Bernard Parish, a low-lying area southeast of New Orleans that was devastated when Katrina’s storm surge overwhelmed protective levees.

They managed to save 24 of their residents, but faced cruelty to the infirm charges for each of them.

The trial, which began on August 16 and included testimony by Kathleen Blanco, the Louisiana governor, was moved 200km northwest to St Francisville to get an unbiased jury. 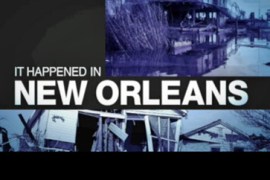 It Happened in…. New Orleans

The final of our series takes an indepth look at after effects of Hurricane Katrina’s devastation.

Bodies still being found after Katrina 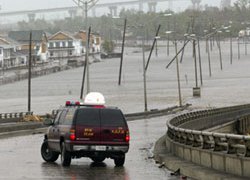 A White House report has concluded that inexperienced disaster response managers and a lack of planning, discipline and leadership contributed to vast US government failures during Hurricane Katrina.

The Republican and Democratic leaders of a Senate committee have chastised Michael Chertoff, director of Homeland Security, as a congressional inquiry found thousands of Hurricane Katrina’s victims could have been spared.