Placido Domingo, who took part in the Three Tenors concerts with Jose Carreras and Pavarotti, said: “I always admired the God-given glory of his voice, that unmistakable special timbre from the bottom up to the very top of the tenor range.

“They threw away the mould when they made Luciano. He will always be remembered as a truly unique performer in the annals of classical music.”

Domingo said he had spoke to Pavarotti regularly during the past year while he was having treatment for pancreatic cancer.

He said that during their last conversation eight days ago, Pavarotti was cheerful and vibrant, even giving lessons to young singers.

Domingo said he was unable to travel to Italy to attend Pavarotti’s funeral but that the LA Opera’s premiere of Verdi’s Requiem on Sunday would honour his friend.

Carreras said he would remember Pavarotti as one of the “most important tenors of all times”.

He said: “We have to remember him as the great artist that he was, the man with such a wonderful charismatic personality, very good friend and a great poker player.”

Venice’s La Fenice theatre flew flags at half staff and held a minute of silence at Thursday’s performance.

James Levine, who was conducting the Boston Symphony Orchestra on Thursday, said: “Luciano’s voice was so extraordinarily beautiful and his delivery so natural and direct that his singing spoke right to the hearts of listeners whether they knew anything about opera or not.”

Stephane Lissner, La Scala superintendent, said: “With him a splendid era of opera singing is entrusted to history.”

In a telegram to the tenor’s family, Romano Prodi, Italy’s prime minister, gave Pavarotti “a last, grateful, applause,” thanking him for “bringing to the world the most authentic artistic image of our country”.

Pavarotti was credited with bringing opera to millions through his showmanship and his outdoor concerts.

He also made a significant contribution to a number of humanitarian causes.

The UN refugee agency recalled how his Pavarotti and Friends benefit concerts had helped collect $7m for displaced people in various conflict areas, from Kosovo to Afghanistan and Angola.

Ricky Martin, who sang Mamma with Pavarotti in 1999 in Modena in support of Guatemala and Kosovo and Vento in 2003 to support peace in Iraq, said the world rightly respected and admired him.

Martin said: “His historic contribution that transcended from popular music to opera will no doubt be present in the hearts of future generations.” 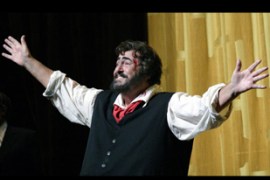 The singer had pancreatic cancer and had lost consciousness on Wednesday.