Morales has put the issue at the top of his agenda.
But the opposition says Morales’ drive to rewrite the constitution is aimed at weakening his opponents and winning more time in office.
The constitutional changes would end presidential term limits and redistribute land.
Dialogue

On Thursday Bolivia’s prime minister appealed to the students to stop almost three weeks of protests.

“We are calling on the authorities and leaders of these groups to put aside their interests so that we can finally open an avenue for dialogue to get out of this situation,” said Juan Ramon de la Quintana.
Until two years ago the majority indigenous country had traditionally been controlled by a small, European-descended elite.
That changed with the election of Morales as Bolivia’s first Indian president.
But despite strong support among the poor majority, the socialist leader has faced a litany of problems.
The constitutional assembly itself has been fraught with delays and bickering that sometimes has sometimes turned into physical confrontation.
Capital move
The protesters are calling for the transfer of Bolivia’s capital from La Paz, a Morales stronghold, to Sucre, the country’s colonial and judicial capital.
Al Jazeera correspondent Craig Mauro says the underlying fears for the opposition are that Morales intends to become a dictator, with critics comparing him to his close ally, Venezuelan President Hugo Chavez.
Morales supporters meanwhile have accused the US of channelling funds to Bolivian opposition groups in an effort to try to destabilise the country.
Washington has denied the charges.
On Monday a group of about 10,000 Morales supporters are reportedly planning to march to Surcre, setting the stage for further potential clashes.
Source : News Agencies 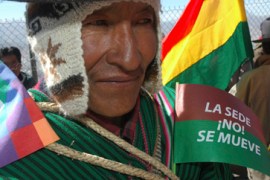 Hundreds of thousands march against a proposal to move the seat of government.