“This is a peaceful protest to voice our message that we are looking for freedom,” Issa Mashar, a senior Hamas leader in Rafah, said.
“We came to send a message from the people who are suffering.”
But shots were fired when hundreds of protesters tried to rush to the border terminal and one teenager, shot in the head, was later pronounced dead, health workers said.
Investigation

Ihab al-Ghusain, a Hamas security spokesman, said: “We are investigating the incident to determine where the shot came from.”

He said Hamas forces had tried to prevent a few of the demonstrators from approaching the border with Egypt. Seven others were wounded by gunfire and trampling.

Ashraf Abu Daya, one of the rally’s organisers, appealed for calm from the crowd.
“There is no need to break into the crossing. The crossing is no longer under the occupation. The crossing is under the control of the Hamas executive committee,” he said.
The Hamas takeover of the Gaza Strip in June triggered the closure of the border crossing, which had been run by Palestinian security forces with European supervision and Israeli security in the background.

“The Executive Force did not use anti-riot methods or gear to stop these demonstrators, they used live weapons and so a young man died,” Nour Odeh, Al Jazeera’s correspondent in Gaza, said.

It is a very unfortunate accident but it’s been another example of, perhaps, excessive force as we saw yesterday during the Friday’s prayers calling by the PLO factions including Fatah.”
On Friday, Hamas men violently dispersed a crowd of Fatah protesters in Gaza City, firing into the air and beating some demonstrators.
About 20 people were wounded in the clashes, including two French journalists and two children, according to doctors and witnesses.
On Saturday, Hamas authorities set bail for the release of Fatah activists arrested during the rally.
Source : Al Jazeera, News Agencies 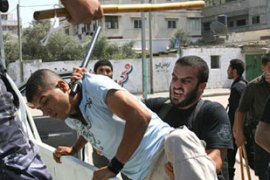 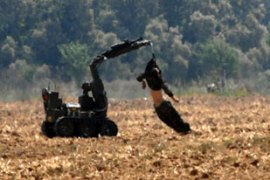