Scores of seats were left empty as Calderon handed in a written version of his state of the union report. He also made brief comments, calling for dialogue with the opposition.

The president had already cancelled his state of the union address to congress because opposition members threatened to stop him from entering the hall.

Instead, Calderon plans to give the speech at another location on Sunday.

Al Jazeera’s Franc Contreras said the embattled president is expected to give a live speech on television in which he will review his achievements since taking office nine months ago.

It is feared that Calderon, who has been trying to reach compromises with the opposition on reforms of the tax system, will not be able to push ahead with some of the changes following his snubbing in congress.

Calderon won last year’s election by less than 1 percentage point, with 36 per cent of the vote. His opponent, Andres Manuel Lopez Obrador, accused him of vote fraud, a claim a court later rejected.

Since last year’s election, politicians from the PRD party have refused to recognise Calderon as president, although they have been willing to work with him on the federal budget and other bills.

In Saturday’s poll, Mexicans gave Calderon high marks for health and education, but he scored lower for his crackdown on drug gangs, whose war over valuable cocaine-smuggling routes has killed about 1,600 people this year.

Since taking office in December, Calderon has deployed thousands of soldiers to attack the drug cartels, but opposition legislators have criticised him for using the military to fight crime, citing reports of rights abuses. 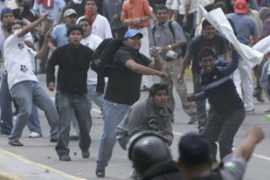 Officials use tear gas on those trying to block folk festival in Oaxaca city. 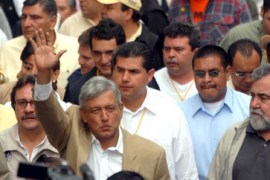