“It’s just a difficult situation for the families, primarily. It’s tough to say to them that we’ve basically run out of options,” Rich Kulczewski, MSHA spokesman, said.

The search for the six men was suspended on Friday evening after a robotic camera failed to provide any useful new information, Kulczewski said.

Mining officials told the families that the camera was successfully dropped down into the mountain, but that it quickly became stuck in the mud as it moved over piles of debris.

Officials could not retrieve the camera and had to leave it stuck about 15 metres from the surface.

“We don’t really know where we could drill again at this time. That’s not to say there might be another hole in the future, you never know. But at this time we’re basically suspending the rescue operation,” Kulczewski said.

Three rescuers working underground were killed in a second collapse August 16, this accident blocked a separate path to reach the trapped miners.

The co-owner of the mine, Murray Energy Corporation, laid off 170 workers at its central Utah mines on Monday, but said on Friday that about 35 of them had accepted transfers to the company’s mining operations in Illinois and Ohio.

Bob Murray, the company chairman, said he extended job transfers to all workers that had been laid off in Utah. 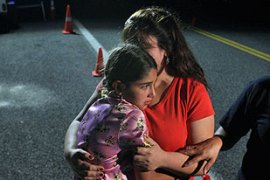 Three men die and six are injured after a seismic tremor causes a rock fall at mine. 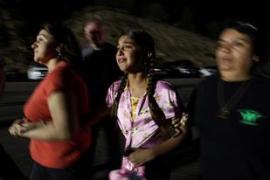 Three men die and six are injured after seismic tremor causes rock fall at mine.