But a few weeks ago he indicated that he would be stepping down for financial reasons sometime before Bush leaves office.

He had taken a pay cut from his private-sector job to work in the White House.

“He’s smart, he’s capable, he’s witty, he’s … able to talk about issues in a way the American people understand,” Bush said.
“I don’t know what he’s going to do, I’m not sure he does yet either,” Bush said. “One, he’ll battle cancer and win, and secondly he’ll be a solid contributor to society.”

Snow is the latest in a string of high-level White House officials to depart.

Karl Rove, a senior White House adviser, left on Friday after he had announced his intention to resign earlier this year.

White House counsellor Dan Bartlett, who like Rove is a longtime Bush adviser from Texas, left earlier in 2007. 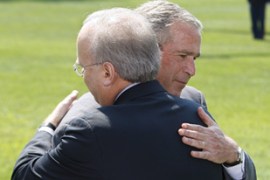