The military efficiency of the game’s protagonists reflects the way Hezbollah views its fighters’ performance in the war.
Culture of resistance
And the game’s makers say the aim is to present what they call a culture of resistance to younger generations.
Hasan told Al Jazeera that he was able to feel what the fighters were going through in the game.

“It also got me to thinking how we can continue in their footsteps,” he said.

The videogame and a museum built in the southern suburbs of Beirut to commemorate the war are part of Hezbollah’s media campaign as it engages in a different struggle.
Some Lebanese blame the group for sparking the conflict with Israel by kidnapping two Israeli soldiers and have called for its disarmament.
But Hezbollah denies its media campaign has anything to do with the political crisis.
Trad Hamadeh, one of Hezbollah’s two representatives in Prime Minister Fouad Siniora’s cabinet until he quit as labour minister in November, said: “We want to show the realities of the war.
The dispute [with Lebanese groups] is purely political and I am sure we will be able to find a settlement.”
Source : Al Jazeera 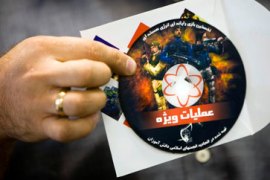 Video game allows players to rescue Iranian nuclear experts from the US military.