At least 200,000 people have been made homeless due to flooding and more than 42,000 hectares of crops have been ruined, the UN office for co-ordination of humanitarian affairs (OCHA) said in a statement.
Farmers ruined
Mohammed Adow, Al Jazeera’s correspondent in Sudan, said that even houses with concrete walls had collapsed under the weight of flood waters.
In south Sudan, aid workers said that farmers were particularly at risk in a region where most of the population depends on agriculture.
Haji Ali, a farmer in eastern Sudan, told Adow that he had lost all of his banana and onion crops due to the flooding and required urgent agricultural help.
“I’m not the only one, we’ve all been devastated. Our crops have been destroyed. We’ll require a lot of help to return back to cultivate this land – help with seedlings and farm implements.”
Disease risk
The OCHA said at least 3.5 million people in Sudan may be at risk of epidemics and that 57 people had died from Acute Watery Diarrhoea (AWD), which has spread due to the floods.

Earlier this month, the World Health Organisation said the outbreak was cholera, which causes severe diarrhoea and can lead to death within hours.

A report from the ministry of health for Gedaref province, which has been most hit by the water-borne disease, said 70 per cent of samples had tested positive for cholera.
On Tuesday, the government’s Humanitarian Aid Commission denied there was any cholera.
Analysts say the governments are reluctant to use the term “cholera” due to political and social ramifications.
Last year, an outbreak of cholera killed 700 people in Sudan and affected 25,000, the first time in years the disease had been reported there.
Source : Al Jazeera, News Agencies 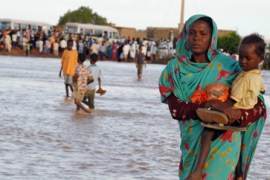