Indian officials have blamed “terrorist organisations” in Bangladesh and Pakistan for the blasts, charges the two governments have denied.
Accusations rejected
India’s home minister acknowledged on Sunday that the government was virtually powerless to prevent attacks.
“Our country is so big that even if we have the information that something is planned, we do not know where or when,” Shivraj Patil, said.

No one has claimed responsibility for planting the bombs – which went off at a packed restaurant and an amusement park where hundreds of people had gathered for a sound a light show – and no arrests have been made.

“Available information points to the involvement of terrorist organisations based in Bangladesh and Pakistan,” YS Rajasekhara Reddy, the chief minister of Andhra Pradesh state, where Hyderabad is located, said after an emergency state cabinet meeting.

Reddy did not name the groups or provide proof, saying “it is not possible to divulge all this information”.

Bangladesh condemned Saturday’s bombings and rejected the accusations that Bangladeshi groups were involved while Pakistan reacted angrily to Reddy’s comments, characterising them as an “irresponsible” knee-jerk Indian reaction.

“Only the Indians have this kind of … supernatural powers that as soon as some terrorist act takes place they know how it happened and who is responsible,” she added.

Arati Jerath, the political editor of Indian newspaper Daily News and Analysis, told Al Jazeera she thought that the police suspected a “Bangladesh militant group which we call Huji”.

“The police here suspect that it [Huji] is based in Bangladesh but they have local modules – sleeper modules – all over, particularly in South India and the state of Maharashtra,” she said.

‘Fomenting tension’
“These are disaffected youth or fanatical groups.”

Sriprakash Jaiswal, India‘s interior minister, said they were part of an effort to undermine the city’s mixed Hindu-Muslim community.

The argument has been used even when the victims are Muslim, as was the case in the May bombings of a historic mosque in Hyderabad that 11 killed people.

More than 80 per cent of India‘s 1.1 billion people are Hindu and 13 per cent Muslim, but in Hyderabad, Muslims make up 40 per cent of the population of seven million. 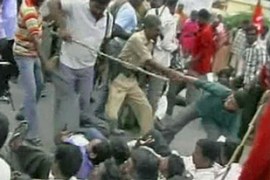 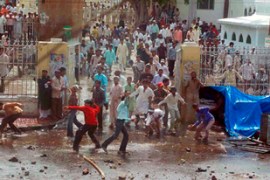