The peacekeeping force also aims to help Lebanon’s army forces take control of southern Lebanon and ensure humanitarian aid reaches civilians.
Progress sought
The new resolution appealed “to all parties concerned to respect the cessation of hostilities” and the Blue Line, which demarcates the Lebanon-Israel border.
The council also called for more progress toward achieving a permanent ceasefire and a long term solution to the border problems along the Blue Line.
The resolution stressed “the need to address the causes of the conflict” along the border, including Hezbollah’s continued hold on two Israeli soldiers who were captured during a cross-border raid in July 2006.
The Security Council appealed to Lebanon’s government to continue efforts to assert its control over southern Lebanon in order to prevent weapons from being moved into the area.
Israel and the US allege that Hezbollah has continued to receive arms shipments from across the border with Syria, while Unifil says disarming various armed groups is not within its mandate.
Smuggling alleged
Alejandro Wolff, deputy US representative to the UN, said “there are unauthorised armed elements and weapons in southern Lebanon,” citing a bomb attack against Unifil and a rocket attack on northern Israel last month as examples.
No claim of responsibility has been made for either incident, but Israeli security services believe Palestinian fighters in south Lebanon launched the rockets on northern Israel.
Despite the unanimous passage of the resolution, the UN’s Russian delegate criticised Wolff for his comments on the alleged smuggling of arms into Lebanon from Syria, which has a good relationship with Moscow.
Such issues “do not relate to this text which we have just adopted,” Igor Scherbak said.
Wolff later told reporters his point was relevant because smuggled arms were used against Unifil when they were attacked.
Source : News Agencies 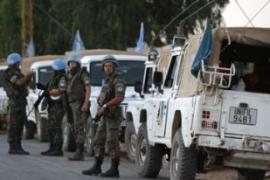 Three Spanish and three Colombian peacekeepers killed in attack in the south. 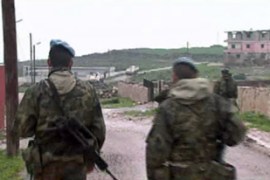 Hezbollah leader guarantees the safety of troops from the UN mission.

The commander of the UN peacekeeping force in Lebanon has said force may have to be used to stop repeated Israeli violations of Lebanese air space.