She has vowed to destroy the Abu Sayyaf group – which her government says has links to al-Qaeda – and has deployed thousands of troops to the region.

They are backed up by advisers from US special forces who are helping to train and provide intelligence to Philippine forces although they are barred by the Philippine constitution from taking part in combat operations.

Earlier this week, Arroyo warned that the renewed military offensive may spark reprisal bomb attacks elsewhere in the country.

Her comments on Tuesday were followed hours later by a bomb explosion in Zamboanga that wounded 14 people.

Speaking after her arrival in the city on Thursday, Arroyo said the military would not be diverted from in its assault on the Abu Sayyaf group.

However, she said she had ordered officials to launch a “humanitarian offensive” on Basilan and Jolo to balance the military assault.

Later, speaking on the island of Basilan, she praised Philippine troops during a 30 minute flying visit to one of the military’s forward bases.

“Thank you for fighting terrorism,” she told them.

The upsurge in fighting followed an ambush in mid-July, blamed on the Abu Sayyaf, in which 14 marines died, 10 of them beheaded.

The most recent fighting broke out last weekend on Basilan, with 15 soldiers and up to 30 Abu Sayyaf fighters killed.

Relief officials say the fighting has forced nearly 24,000 people to flee their homes in Jolo and Basilan, with 40 hamlets evacuated and 14 schools closed since early July.

“The situation in Basilan remains critical due to ongoing operations against Abu Sayyaf Group targets,” the government relief agency said.

This week the government called off planned peace talks with the Moro Islamic Liberation Front – the largest Muslim separatist group – although it insists the move was not linked to the upsurge in fighting.

Al Jazeera’s Veronica Pedrosa, who is in the southern Philippines, says that with amid mounting numbers of casualties and displaced civilians, more questions are being asked about the offensive.

The Moro Islamic Liberation Front and the Moro National Liberation Force, the two main rebel groups, also have a large presence on the two islands.

The military says neither group is being targeted by the current offensive, but army commanders on the ground admit some of their men are fighting alongside Abu Sayyaf.

As a result, there are fears that by stepping up the fight against Abu Sayyaf, the government could widen the conflict. 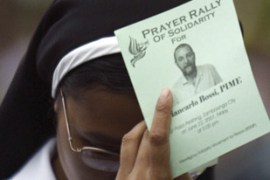