Small gash, big headache
The crew and officials from US space agency Nasa inspected the 9cm gash that extended over two of the ship’s heat-resistant belly tiles.
Nasa said the gouge looked only slightly worse than it did in orbit, and that no charring was found on the exposed felt material which is the last barrier before the shuttle aluminium frame.
The tear on the shuttle’s protective tiles was caused by falling debris during lift-off, similar to what happened in the Columbia disaster in 2003.
A chunk of fly-away foam had damaged the shuttle Columbia’s wing, allowing hot gases to seep in during the re-entry and tear the shuttle apart, killing all seven astronauts on board.

Commander Scott Kelly said he was “a little bit underwhelmed” when he saw the gouge for himself after landing.

“We knew how big it was conceptually. We were told the dimensions. But to see it, it looked rather small,” he said.
Nasa has three more launches scheduled that risk suffering the same kind of damage, but engineers are considering short-term options including shaving some foam from the brackets and applying oil to reduce condensation and ice build-up.
Michael Griffin, Nasa’s administrator, said he must satisfied that any proposed change “is necessary and, in fact, beneficial” before ordering modifications.
Since the damage was reported and right up until landing, Nasa had stressed that the gash in Endeavour’s belly would not endanger the shuttle during its landing.
The agency is trying to determine whether the piece of debris was foam, ice or a combination of both, and engineers say launch debris can never be entirely eliminated.
Bill Gerstenmaier, Nasa’s space operations chief, said of the problem: “We’ve really taken this huge complex problem… and we’ve really shrunk it down to just very, very few areas, essentially ounce-size pieces of foam that we need to go work with.”
Nasa has targeted the next flight for October 23 when a connecting hub will be installed on the station so two new laboratories built by Europe and Japan can be linked up to the complex later this year and in 2008.
Source: News Agencies 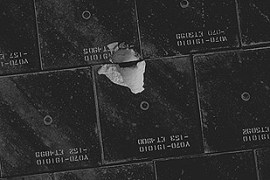 Nasa says no repairs for Endeavour

Mission managers decide that damage poses no threat to shuttle and crew. 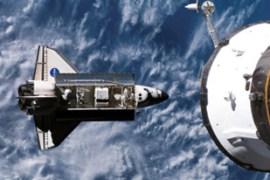 Nasa to look at Endeavour dent

A dent on the space shuttle may force crew to fix the problem. 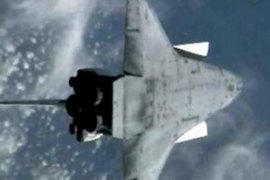 Endeavour ‘gouged’ by a piece of ice shortly after take-off. 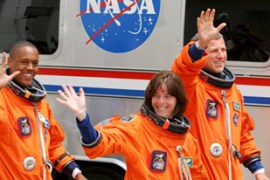