Migrant workers flock to the Gulf lured by a better life. But, in a three-month investigation, Al Jazeera found that many labourers are missing out on the wealth generated by the region’s construction boom.

The Gulf countries are enjoying an economic boom. Construction projects, buoyed by oil-rich investors, were worth $200bn in 2006 alone.

The pace of development has meant that luxury lifestyles are becoming the norm rather than an aspiration for local populations and resident Western expatriate communities.

This success has been built by a vast army of migrant workers numbering about 10 million in the Gulf.

Most of these labourers come from Asia, primarily India, Pakistan, Nepal, Bangladesh and Sri Lanka.

On arrival, their passports are taken by their employer. On the construction sites they risk injury and even death as they work in temperatures that sometimes touch 50C.

At the end of the day, many return to crowded, cramped and unhygienic accommodation in vast camps usually on the outskirts of the cities.

For all this work the average wage is between $5 and $7 a day.

But back in their home countries the dream of striking it rich in the Gulf holds a powerful appeal for young Asian men looking to better their circumstances and that of their families.

“Many of these workers are illiterate and very naïve,” Hadi Gahemi, a researcher with Human Rights Watch, says.

“It’s their first time to leave the village. They do not understand the contract they are signing. It’s only when they on the ground working that they realise the kind of financial imbalance they are working with.”

One of these young men, Thanegavel Selvakumar, was 22 when he left his native Tamil Nadu, in southern India for Dubai.

His sister told Al Jazeera about his hopes and how “he wanted to earn more to improve his life here”.

“He was educated here at the local college, but he thought the Gulf was his best chance to earn money,” Sudha Selvakumar says.

Typically a would-be worker will approach a local agent who will then introduce them to an established recruitment company.

“I don’t know who the company was, but he was hired as a labourer,” Sudha said. “A local agent from the nearby village recruited him. He knew somebody from outside the village, so they sent him with that person who arranged everything.”

The day Thanegavel left for Dubai was the last time his family would ever see him. He committed suicide in 2005 at his labour camp.

A copy of his suicide note seen by Al Jazeera reads: “I am making this decision of my own free will. This no one’s fault. The reason is money. My financial problems are too much for me, I cannot make the repayments on my loan.”

Thanegavel had paid $1,200 to his agent – the equivalent of nearly two years’ salary for the average Indian labourer. His family have now had to take on the loan.

“We still not have been able to repay the money that was borrowed,” Sudha says. “We are having to sell the land we have to settle the loan.”

The practice of charging the worker for this cost of flights and visa is commonplace. It is also illegal.

One labourer in Qatar told Al Jazeera he paid $2,500 for his visa.

“Other people here paid slightly more or a little less,” he said. “Despite this my employer deducts 25 per cent from the salary we were promised.”

The practice may be illegal, but this does not stop the agents exploiting the hopes of those wishing to get to the Gulf. Many of the leading Asian recruitment companies have offices in the region.

Posing as a potential client, Al Jazeera secretly filmed one Dubai-based agent where he admitted his company charges workers. He went on to reveal how prevalent the practice is.

“Every contractor, every subcontractor has workers who paid,” he said. “We will charge the people. It’s OK, they don’t mind.”

The agent’s clients do not mind because they are saving substantial sums, while the worker has no option but to take on crippling levels of debt just to secure a job.

The chairman of the Gulf constructors association, who also heads a major construction company, rejects the suggestion his members are responsible for the practice.

“It is not my responsibility as a contracting company owner to pay dues to employment agencies in India and Pakistan or the Philippines,” Ahmed Saef Belhasa says.

Thanegavel’s situation lead him to make the decision to take his own life. To find out how typical his story is Al Jazeera spoke to dozens of workers who asked for their identities to be protected. Many were disappointed by their experiences in the Gulf.

“I was originally offered $220, but now I am paid only $185 as I have to pay for accommodation and food,” one worker from Kerala said. “I have been receiving this salary for several months. This is not enough to support my family in India.”

One worker in Qatar said: “I have been working for 30 months, but have been paid for only four months.

“My sponsor doesn’t care. He didn’t even come to see us to discuss the matter so that we could sort it out.”

Evidence of the pressure these men are under is slowly emerging. Although there are no publicly available figures for the number of suicides, in 2006 the Indian embassy in the UAE recorded 109 confirmed cases of suicide by Indian workers in the country.

That is a 30 per cent rise on last year.

But, despite tragic cases such as Thanegavel’s, hundreds of young men continue to leave their villages.

The standard of their facilities and accommodation at the labour camps is a common concern for the construction workers and those seeking to protect them from abuse.

“We don’t have food, water, no electricity inside the accommodation. We are living a terrible life here,” one worker in Qatar said.

As well as living conditions, the oppressive heat and long hours that labourers are forced to work is also a concern.

Deaths in the workplace remain an unaddressed issue throughout the region. Early this year, at a major site in Doha, Qatar, a wall collapsed killing four workers.

Accidents of this type are frequent, but the absence of any public records makes establishing the number of injuries and fatalities at construction sites impossible. Without these records, effective independent monitoring of corporate safety records is impossible.

There are, slowly, signs of change emerging. Over the past 12 months all the Gulf countries, to varying degrees, have amended labour laws to better protect workers’ rights. The issues have generated more press attention and public debate.

But critics believe this progress by the Gulf countries is insufficient.

“Thirdly they could change the process by which they recruit and ensure that no worker who comes to them has paid the upfront fee. They could do that immediately.”

While those who have managed to find a way out of the camps believe that while the reality of the labourers’ lives remains hidden nothing will change. 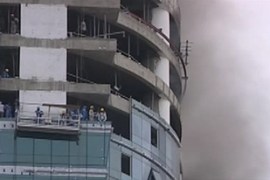 Several workers are trapped by the flames engulfing building under construction. 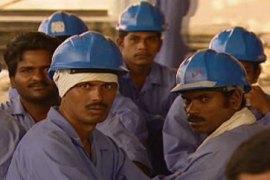 Exposing the appalling conditions facing many Asian labourers in the Gulf.

The prime minister of the United Arab Emirates has ordered new measures to protect the rights of foreign labourers working in the state.