The blaze quickly reduced the aircraft to a charred wreck and passengers reported hearing several explosions as the flames took hold.
Police say terrorism is not a suspected cause.
Taiwan-based China Airlines says it has grounded its remaining fleet of 737-800 aircraft, as well as those belonging to subsidiary Mandarin Airlines, pending a thorough inspection.
Fuel leak

Aircraft-maker Boeing and the US National Transportation Safety Board have also dispatched investigators to Japan to look into the causes of the fire.
Akihiko Tamura of Japan’s transport ministry said that airport traffic controllers had received no report from the jet’s pilot indicating anything was amiss as it came in to land, and or even as it pulled up close to the terminal.
“The fire started when the left engine exploded a minute after the aircraft entered the parking spot,” he said.
Another ministry official Fumio Yasukawa said initial reports from ground personnel indicated that a fuel leak from the right engine could have led to the explosions.
According to a China Airlines spokesman, Sun Hung-wen, the aircraft skidded after landing, igniting a fire that prompted the emergency evacuation.
“The plane landed safely so we are still checking why there was a fire,” he added.
‘Total chaos’

Meanwhile passengers have been recalling their dramatic escape from the burning aircraft – many also saying there was little indication anything was wrong until they were ordered to evacuate.

One holiday tour guide on the aircraft said the cabin crew were already standing by the doors ready to bid farewell to passengers when smoke started to billow outside the plane.
“The passengers saw the smoke first and they began to yell and demand that the doors be opened,” the man, who gave his name as Tsang, told the Associated Press.
Officials say the aircraft was fully evacuated within 90 seconds of the emergency chutes being deployed.

A Taiwanese woman said she was stricken with fear the moment she slid down the chute. “I was running and crying,” said the woman, who declined to identify herself. “Running and crying.”

The woman said “there were these big bangs” and people started pushing and shoving each other after seeing the smoke.
“It was total chaos,” she said.
Another passenger who gave only his surname, Chen, said he started running the moment he slid off the plane.
“I ran so hard my sock tore,” he said. “I think I got my life back.”
The crash is a setback for China Airlines which had improved its safety record after a series of deadly crashes.
In 2002, a China Airlines Boeing 747 crashed as it flew from Taipei to Hong Kong, killing 225 people, while during the 1990s, some 450 people died in three separate accidents involving China Airlines aircraft.
Source: News Agencies 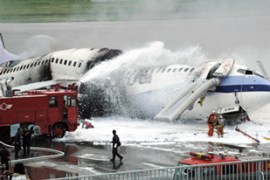 All passengers and crew survive fierce fire at Okinawa airport.