“Just as I have asked the head of the Farc [to co-operate], and maybe they will hear this message, I also have to ask the same of President Uribe.”

The delegation includes Betancourt’s mother and the relatives of 11 local legislators kidnapped five years ago and recently killed in violence which the Colombian government blamed on guerrillas.

Chavez has asked Piedad Cordoba, a senator and a Chavez sympathiser whom Uribe has named as an intermediary, to help him make contact with the Farc leadership.

He says he will act as “an observer and a guarantor” of a hostage exchange.

Uribe and Chavez continue talks in Bogota on August 31.

Angela Perez, the wife of one kidnapped politician, said on local television: “We have always asked for a meeting zone to be established, but the important thing is for the Farc and the government to sit down face to face.”

Farc has been fighting successive Colombian governments for more than 40 years.

The US has accused Chavez of aiding Farc fighters, but he denies any links to the group and has previously insisted on staying out of Colombia’s internal conflict.

Meanwhile, Uribe has maintained an image as a leader who has confronted other armed rebels and has negotiated the surrender of right-wing paramilitary forces in a campaign to reduce Colombia’s violence.

Farc wants Uribe to demilitarise an area in southern Colombia to help talks over swapping hostages for jailed rebels.

Uribe has released some fighters but refuses to withdraw troops under the rebels’ conditions.
Source : News Agencies 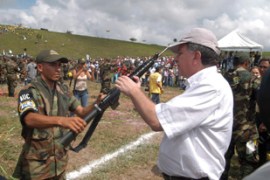 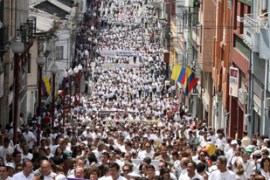