He made it clear that France had no regrets about its original decision to oppose US intervention in Iraq, and insisted there could be no military solution to the conflict.
Nicolas Sarkozy, the French president who was elected in May, has sought to improve relations between the two powers, saying he wanted France to be a friend of the United States.
Sarkozy paid an informal visit to the Bush family estate during his US holiday where they chatted over burgers and hotdogs.
UN memorial
France has no troops in Iraq, but despite its disagreements with the US over its decision to invade, has kept an embassy in Baghdad.
While in the Iraqi capital, Kouchner visited the the fortified UN compound where 22 people killed when the world body’s former Iraqi headquarters was hit by a bomb exactly four years ago.
Accompanied by Hoshyar Zebari, his Iraqi counterpart, and Michael von der Schulenburg, the UN deputy special representative in Iraq, he laid a wreath in front of a simple memorial to those killed in the blast.
Later on Sunday, Kouchner was due to meet Nuri al-Maliki, the Iraqi prime minister, who is due to leave on a three-day visit to Syria on Monday.
Source: News Agencies 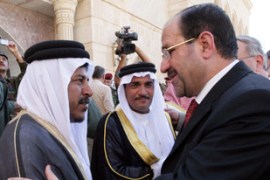 But absence of largest Sunni party casts doubts on meeting’s credibility in Baghdad.