Costas Karamanlis, the Greek prime minister, has confirmed early general elections will be held on September 16.

“I have handed over a letter [to the president] asking for the dissolution of parliament and the call for elections on September 16,” Karamanlis told a news conference after meeting the president, Karolos Papoulias, on Friday.

Karamanlis called the elections six months before his government’s first term is due to expire, saying he needs a new mandate to push through a series of economic and social reforms.

“We need to continue with change and reforms on the basis of fiscal stability and move ahead with greater speed and a new dynamism,” he said. “This needs a fresh and strong popular mandate.”

Recent opinion polls show the ruling conservatives leading by only one or two percentage points over the socialists, making next month’s election too close to call.
The pace of economic and social reforms needed for Greece to catch up with its euro zone partners will be one of the campaign’s key issues.

Elections were due by March 2008, but Karamanlis had come under pressure from ministers to go to the polls early as the ruling party’s popularity fell over a series of scandals and destructive forest fires.

The ruling New Democracy party, which came to power in 2004 after 11 years of socialist rule, has been praised by the European Union for turning the economy around, cutting deficits and pushing with reforms and privatisations.

But it has faced increasing protests at home over unpopular economic measures, slow social reforms and a series of political and economic scandals.

Karamanlis said: “Drafting the new budget, a budget of development, a budget of responsibility and social solidarity, is a national matter.”
He said the new government would need a strong parliamentary majority to continue with reforms.

However, changes in electoral law mean it is likely the new parliament will include five parties instead of the traditional four, chipping away at the winner’s majority.

George Papandreou, the leader of the opposition Socialists, told reporters outside his house he was “certain of victory”.

Analysts have said a small parliamentary majority for the winning party could affect the speed of reforms.

“What could cause problems regarding reforms would be a marginal majority for the winning party,” Vassilis Antoniadis, a fund manager with Marfin Global Asset Management, said. “However, snap elections are good as this pending issue that was hanging over the market will disappear.” 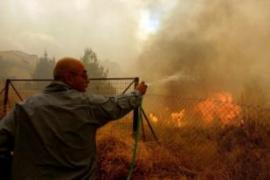 Hundreds of residents of the Greek capital are forced to evacuate their homes.