Neither Antonini nor anyone else on the aircraft has said where the money came from or what it was for.

The affair has shaken public confidence in the government of Nestor Kirchner, Argentina’s president.

A similar shadow has been cast over the socialist government of Hugo Chavez, Venezuela’s president.

An Argentinian prosecutor said on Tuesday that she was seeking an arrest warrant for Antonini, although no judge has ruled on the request.

“There is no need to take out an arrest warrant,” Albarracin told La Nacion.

He said his client was not a fugitive but had left Argentina “because there was no restriction against his doing so”.

Albarracin said he was in contact with Antonini in Florida, where the dual American-Venezuelan citizen has an apartment.

Venezuelan officials have repeatedly denied any relation between Antonini and PDVSA or Chavez’s government.

However, Argentina’s Clarin newspaper reported on Wednesday that Antonini made three previous trips to Argentina in the company of a governor loyal to Chavez.

Uruguay’s Radio Espectador reported on Tuesday that PDVSA had reserved and paid for Antonini’s hotel rooms when he made several recent trips to Uruguay.

PDVSA’s Uruguay unit and the Venezuelan embassy in Uruguay said they would not comment on the report.

The incident caused one Argentinian official to resign for permitting Antonini to ride on the aircraft.

Alberto Fernandez, an Argentinian cabinet chief, said on Wednesday that the incident would not affect ties with Venezuela.

He called it an “unfortunate case” but said the acts of one individual “cannot affect the diplomatic ties between two countries”. 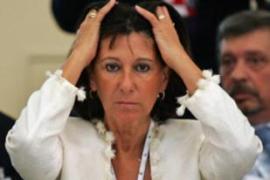 Miceli denies any wrongdoing and says the money is a down payment for a house.