The two main anti-government groups are the Sudan Liberation Army (SLA) and the Justice and Equality Movement (Jem), although both groups contain splits within themselves, some along ethnic lines.

In the first of a series of reports, Al Jazeera’s Mohamed Vall spoke to the commander of the local Abdul Wahid group, a faction of the SLA, about his continuing fight against the Sudanese government.

Commander Gaddoura had never shown his face to the world before and Vall travelled to the peaks of Jebel Marra – a mountain range in the heart of Darfur – to speak to him.

His exclusive interview comes from a region which Abdul Wahid consider to be a “liberated areas,” free of governement control. 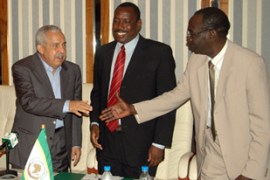