The US and Norway also have claims in the Arctic region, where a US study suggests as much as 25 per cent of the world’s undiscovered oil and gas could be hidden.
Danish expedition

Denmark sent a team of scientists to the Arctic region on Sunday to seek evidence that the Lomonosov Ridge, a 2,000km underwater mountain range, is attached to the Danish territory of Greenland.

The Danish expedition, which has been planned for years, might allow the Danes to stake a claim, under the UN, to territory that could stretch all the way to the North Pole.

Russia and Canada “also have serious projects”, Sander said.
“But the lowering of the flag was simply a summer joke.”

The race for sovereignty in the Arctic is quickening partly because global warming is shrinking the polar ice, which could someday open up new shipping lanes and enable exploration projects to become viable.

Further pressure to the Arctic nations also comes from the 1982 UN Convention on the Law of the Sea, which gives signatories 10 years after ratification to prove their claims under the largely uncharted polar ice cap.

All but the US have ratified the treaty. Denmark, which also plans expeditions in 2009 and 2011, expects to deliver its claim in 2014, Sander said.
Source: News Agencies 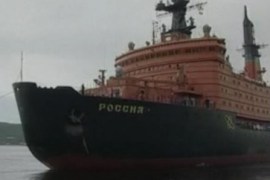