After the vote, Somare said Papua New Guinea – the South Pacific’s most populous island nation with 6.1 million people – had experienced unprecedented growth under his previous government.

“We will use the experience to achieve even greater heights over the next five years,” he said.

“Today, I am happy to lead once again this large but manageable coalition government.”

Although rich in mineral resources, most people in Papua New Guinea lead subsistence lives in villages, with about 40 per cent living on less than $1 a day.

Somare, 71, who was Papua New Guinea’s first prime minister at independence in 1975, has now won the position four times.

But despite his win on the floor of parliament, Somare now faces a legal challenge, with the courts due to decide on Friday whether his National Alliance leadership is valid or not.

Somare now leads a country with simmering tensions over an influx of Chinese immigrants, ongoing law and order problems and concerns that citizens are missing out on any benefits from an economy growing on the back of strong mineral resource prices.

His victory, however, will do little to help his country’s relationship with its biggest aid donor Australia.

Australia, which provides more than $302m  a year in aid, has angered Somare, the Solomon Islands and Fiji with its determination to stamp out corruption and crime in the South Pacific. It is demanding that Fiji return to democracy after a military coup in December 2006.

Somare accused Australia of meddling in elections after Canberra called on Port Moresby to release a secret report into how lawyer Julian Moti, wanted in Australia on child sex charges, escaped to the Solomon Islands on a Papua New Guinea defence force plane.

Somare has refused to release the report and denies that he was involved in Moti’s escape. But local media said the report blamed Somare and recommends that the prime minister face charges. Moti has since been appointed attorney-general in the Solomon Islands.

Alexander Downer, the Australian foreign minister, said Canberra was still unhappy about Moti’s escape and repeated calls for Somare to release the report into the incident.

“We would hope with Sir Michael Somare reappointed as the prime minister, he would now publish the board of inquiry’s report into the Moti affair so that everybody could have a good look at it,” Downer said. 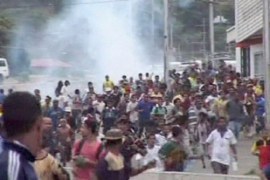 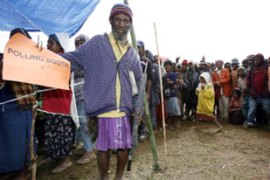