Peter McKay, the Canadian foreign minister, said last week: “Look this isn’t the 15th century. You can’t go around the world and just plant flags and say ‘we are claiming this territory’.”
Economic and strategic factors have seen Russia, Canada, the US, Norway and Denmark competing to secure sub-surface rights to the Arctic seabed.
Oil and gas
One study by the US Geological Survey estimates that up to a quarter of the world’s undiscovered oil and gas lies in the arctic seabed.
Harper said on Thursday: “All Canadians need to know that there is a convergence of environment, economic and strategic factors in this frontier that will have a critical impact on the future of our country.”
Canada plans to beef up its presence in the arctic by building naval ports and increasing patrols of key passage ways.
“Canada has a choice when it comes to defending our sovereignty over the Arctic. We either use it or lose it. And make no mistake, this government intends to use it,” the prime minister added.
A disputed Northwest Passage running below the North Pole from the Atlantic to the Pacific through the Arctic archipelago is also becoming an attractive shipping route as global warming melts the ice and exposes unexplored resources.
Commercial ships can shave off some 4,000 km from Europe to Asia compared with the current routes through the Panama Canal.
In 1984, Denmark caused a stir by raising a flag on Hans Island, one of the islands south of the North Pole, buried a bottle of brandy at the base of the flagpole and left a note saying “Welcome to the Danish island”.
Two years ago, the dispute erupted again when Canada’s defence minister set foot on the island while troops hoisted the Maple Leaf flag.
Denmark sent a letter of protest to Ottawa, while the Canadians and Danes took out competing Google ads, each proclaiming sovereignty over the rock.
Source: Al Jazeera, News Agencies 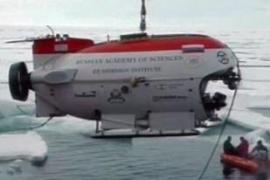 Explorers plant national flag under the North Pole in a claim to energy-rich region.