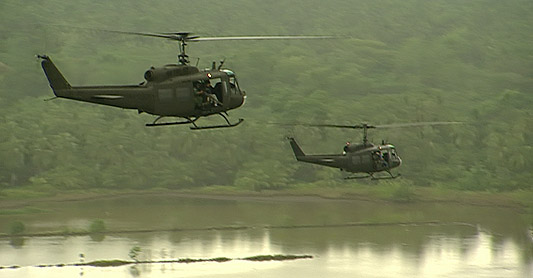 At least 120,000 people have been killed while two million more have been internally displaced since the separatist war started in the mid-1970s.

Veronica Pedrosa gets exclusive access to join the marines on Basilan island – the frontline of the forgotten conflict in Mindanao.

The flight path of the military helicopters passes over swamps and jungles on the island which has seen peace over the past four years, but which has known war far longer.

This decades-long conflict is a result of a complex combination of centuries-old ethnic, clan and religious rivalries.

The Philippine defence chief and his generals, local officials and government negotiators are working on plans to match the dangerous mood on Basilan.

The headquarters of the First Marine Brigade is based on the island, which has about 5,000 soldiers.

Everyone is worried that a major offensive is in the making, and the northern side of Basilan is preparing for the worst.

The armed forces have vowed to find the culprits no matter how long it will take, and without putting the peace process at risk.

As one general described it, this will be a silent war, but it will be a war of attrition.

There are military checkpoints every few kilometres and everyone is searched for weapons and questioned.

At the heart of the dispute are the marines, who on July 10 were caught in a gunfight that lasted eight hours.

The group denied mutilating any of the bodies of those killed.

The military says it lost 14 men, 10 of them beheaded, and now wants to see those responsible brought to justice. 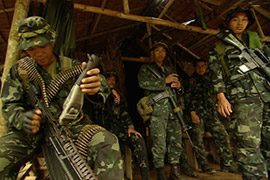 “They were walking and firing towards us. They were just casually walking … [and] overran our position,” he said.

For the marines, it has become a matter of honour, which explains the codename for the upcoming offensive – Ultimate Justice.

The commanding officer of a team deployed to implement the plan says war will not happen if he can help it.

General Juancho Sabban, the marine commander of Joint Task Force Thunder, said they will “try to control the firepower”.

“It’s not the ‘shock and awe’ operation. We will be doing this deliberately and we’ll have selective targets,” he said.

Roderick Furigay, the mayor of Lamitan city, said: “We have activated all our internal defence team rescue team already in place if anything goes wrong we are ready to face.”

The situation on Basilan has become so volatile that any confrontation could set off all-out war and completely breakdown the already-stalled peace talks.

Although the group claims it has thousands of fighters and strong grassroots support numbering “millions”, the actual figure is thought to be much smaller.

For many in Mindanao, both Christians and Muslims, any government will do so long they can live in peace and put food on the table.

Though not engaged in active combat, they do their drills and stay alert.

About 150 fighters live here with their families who are all prepared to die for their cause.

Like Violy, who lost her husband to the war. Her children are now involved too. 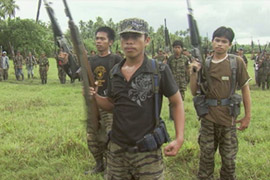 Teenagers say they would die for their cause

She said she will fight to the very end until Mindanao is peaceful and prosperous in the name of the Muslim people.

Despite a ceasefire with government forces, many infractions have occurred in recent months and tensions are again running high.

But a new breed of fighters are being trained here, teenagers like Pagya Tapa, who is not quite sure what peace looks like but is willing to die to get it.

Jaafar said: “We will exhaust all peaceful means … let us see what will happen in this negotiation … anyway revolutionaries have many options.”

But along with the call for peace also comes a warning.