The draft paves the way for the UN special envoy in Iraq to “advise, support and assist” the Iraqi government in political, economic, electoral, legal, constitutional, refugee and human rights matters.
The text also highlights the “important role” of multinational forces in Iraq and says “security is essential for Unami to carry out its work on behalf of the people of Iraq”.
Staff increase
An increase in the number of the UN mission’s staff is being considered as the resolution for an expanded UN mandate in Iraq circulates. The current mandate expires on August 10.

“We are on a very strong effort to increase the numbers” of international staff in Iraq,” B Lynne Pascoe, undersecretary-general for political affairs, said after briefing the council on Tuesday.

“The current ceiling is 65. I think by the fall, by October, we’ll be up to about 95.”
The UN staff council, the executive of the UN staff union which represents more than 5,000 staff at the organisation’s headquarters, unanimously adopted a resolution calling on the secretary-general not to send any more staff to Iraq.
The staff council’s resolution referred to “the unacceptably high level of risk to the safety and security of United Nations personnel currently serving in Iraq”.
The staff council asked that the resolution be sent to the secretary-general and the president of the Security Council.
Current presence
A small UN contingent has been in Iraq since August 2004, after Kofi Annan, former UN secretary-general, pulled all staff out of Iraq in October 2003.
The UN pullout came after two bomb attacks at UN headquarters in Baghdad, as well as a series of attacks on its workers.
Khalilzad said on Tuesday that “the UN needs to play an enhanced role in helping the Iraqis overcome the difficulties they have at the present time”.
He said the UN can oversee dialogue between Iraqis on the “economic and political sharing of power”, and that it can aid Iraqi reconciliation and humanitarian issues.
Source : News Agencies 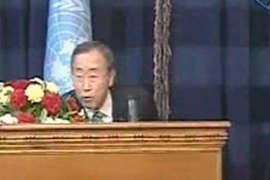 Draft resolution to extend its mandate looks likely to be approved next week.