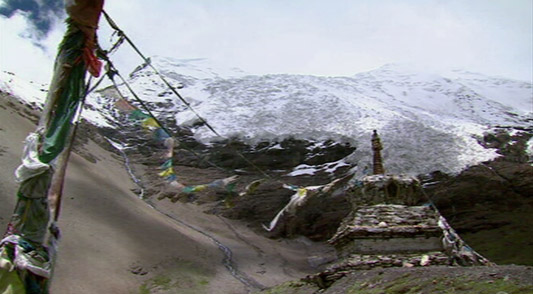 South Asia is struggling to deal with the worst monsoon flooding in living memory but as mountain glaciers up north slowly vanish, drought in the future promises an even greater misery.

Al Jazeera’s Tony Cheng travelled to the Tibetan plateau to witness first-hand the impact of climate change on an area known as the “roof of the world”.

The northern Himalayas, with crystal clear skies, is one of the cleanest and least polluted places on earth.

And for the nomadic herders who roam the mountains and valleys, little has changed, their lives packed up on the backs of their nimble footed yaks.

But they have noticed one big change in all the years they’ve been walking these paths.

This was just a stream, said a young herder, but has now become a fast-running river, swelling with glacier run-offs.

Climate change is raising the temperature in Tibet by as much as a third of a degree a year – that’s twice as fast as the rest of the world.

High in the Himalayan range are tens of thousands of glaciers that feed into Asia‘s largest rivers, and they are melting at an alarming rate.

Some in the worst affected areas are shrinking by up to 17 per cent over the past 40 years.

The meltwater from these glaciers pour into the Mekong, the Yellow River, the Yangtze, the Indus and the Ganges, raising the risk of catastrophic flooding.

The situation also threatens hundreds of millions of people who rely on the rivers for their survival.

One of Asia’s most valuable sources of freshwater is quickly melting away with more than 3,000 square kilometres already lost.

Dr Li Lifeng, director of the World Wildlife Foundation’s the freshwater programme, said: “The evidence is all too clear. This, the Karola glacier, has melted halfway up the mountain.”

The ice is melting as fast as seven per cent a year.

In the long term though, the glacier melt will lead to drought.

But the glaciers of the Tibetan plateau have another important role to play.

They soak up the heat from the plains below, with devastating results.

And down the river the effect has been devastating.

Heavy rains have broken the banks of Asia’s already-swollen rivers this year, with 600 dead and a million more displaced in China alone.

Li said: “For the communities that live in the shadow of the shrinking glaciers, there’s little they can do about environmental changes from elsewhere but have faith that the situation can be reversed.”