Prosecutors did not say Spielman took part in the rape or murders, but said he went to the house knowing what the others intended to do and served as a lookout.

“I hate the government,” Paige Gerlach, Spielman’s sister, screamed as the sentence was announced. “You people put him [in Iraq] and now, this happened.”

Spielman, 23, received the longest sentence of any of the four soldiers who have been convicted of the attack.

He also received a dishonorable discharge, lost all pay and allowances and was demoted to the rank of enlisted man.

The three other soldiers pleaded guilty under agreements with prosecutors and were given sentences ranging from five to 100 years.

The 110-year sentence was part of a plea bargain Spielman’s defence had made with prosecutors restricting the number of years Spielman could serve in prison regardless of the jury’s verdict.

He had pleaded guilty on Monday to lesser charges of conspiracy to obstructing justice, arson, wrongfully touching a corpse and drinking.

Steven Green, the alleged leader of the group during the attack, will face a civilian court because he was discharged from the army before the crime came to light.

Federal prosecutors have said they will be seeking the death penalty in Green’s case.

Private Bryan Howard, who stood on guard during the attack, was sentenced to 27 months in jail for acting as an accessory as a lookout and obstructing justice.

Prosecutors rested their case against Spielman on Thursday to address Barker’s story that Spielman acted as a lookout during the attack.

He had earlier testified that he had allowed investigators to draft sworn statements for him that implicated Spielman in the crime.

On Wednesday, Barker testified that parts of the document were untrue, including references to Spielman’s role in the conspiracy to attack the family and his knowledge of plans to rape al-Janabi.

However, Cortez testified that Spielman stood guard as his fellow soldiers raped the girl a few feet away, and did nothing to stop the assault.

During their courts-martial, Barker and Cortez testified that they took turns raping the girl while Green shot and killed her mother, father and younger sister.

Green shot the girl in the head after raping her, they said. Her body was set on fire with kerosene to destroy any evidence, according to previous testimony. 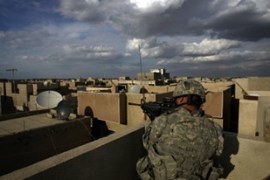 US soldier sentenced over Iraq rape

Court concludes US soldier accessory to rape and murder of 14-year-old girl.

US private pleads guilty to aiding the rape and murder of 14-year-old Iraqi girl.