Divers have been frustrated in their recovery operation by strong currents and low visibility.

However, the potential death toll dropped on Friday as officials tracked down some of the 20 to 30 people originally reported missing.

Only eight people are believed to be missing after a number of people feared lost were tracked down elsewhere.
“Those eight people – and it’s a very fluid number – I hope they’re just mistakes, that they’re vacationing or something,” Sheriff Richard Stanek, head of the underwater recovery effort, said.
The collapsed bridge was rated “structurally deficient” twice, in 1990 and 2005, federal officials have said, adding that warnings were ignored by the state, which relied on patchwork fixes instead.
The accident on Wednesday has led to orders by the government to inspect more than 70,000 bridges across the country previously found with a variety of structural defects.

The US congress is working on a $250m federal aid package for the disaster, which occurred during rush hour and injured at least 79 people.

Corrosion and fatigue
The 1990 inspection cited significant corrosion in the bearings of the collapsed span, a finding which required portions to be repaired or replaced, and inspections every two years.

Subsequently, fatigue cracks and corrosion in the steel around the bridge’s joint were repaired but a federal inspection in 2005 still rated the bridge structurally deficient.

Dan Dorgan, a Minnesota bridge engineer, said: “We thought we had done all we could. Obviously something went terribly wrong.”
The collapsed bridge last underwent a full inspection on June 15, 2006, and was not scheduled for replacement until 2020.
George Bush, the US president, said the federal government would help rebuild the bridge, but made it clear the state government was responsible for fixing the structural deficiencies on the eight-lane bridge.
“We in the federal government must respond, and respond robustly, to help the people there not only recover, but to make sure that lifeline of activity gets rebuilt as quickly as possible,” he said.
High cost
Engineers estimate that repairing the more than 70,000 bridges with structural deficiencies would take years and cost more than $188bn.
The American Society of Civil Engineers said that works out to at least $9.4bn annually over 20 years.
In a separate cost estimate prepared five years ago, the Federal Highway Administration said it would take at least $55bn to address the backlog of required bridge repairs.
Gregory Cohen, president of the American Highway Users Alliance, an advocacy group representing motorists, said: “We’re not doing what the engineers are saying we need to be doing.”
He said engineers have estimated that $75bn a year is needed just to keep highways and bridges from further deterioration, but only about $60bn a year is being provided.
Source: News Agencies 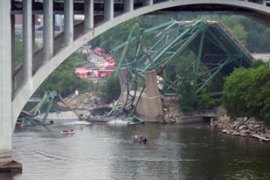 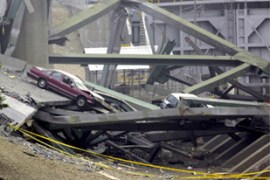 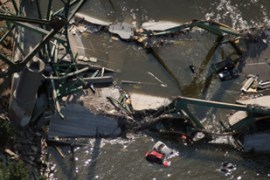