Officials have also decided that McLaren-Mercedes will not earn any points in the constructors’ championship from the race.

McLaren, who are 27 points ahead of Ferrari in the championship, immediately appealed the decision but this will only cover the withdrawal of points not the personal penalty handed out to Alonso.

Alonso, Hamilton, and Ron Dennis, the team principal, were summoned to the FIA inquiry to explain why the Spaniard had stopped in the pitlane for such a long time with Hamilton stuck behind him.

“The attitude of the team at the end of qualification was considered prejudicial to the interests of competition and motor racing,” the FIA statement said.

Hamilton had led the session until Alonso pipped him by 0.107 seconds with his final lap after blocking him in the pitlane.

The Spaniard, who is just two points behind Hamilton would regain the championship lead if he won Sunday’s race at the 4.381km Hungaroring.

Dennis had said Hamilton was to blame for failing to obey repeated team instructions to let Alonso go past earlier in the session at a stage when drivers were burning off excess fuel.

“They were out of sequence because Lewis should have slowed and let Fernando past and he didn’t. He charged off,” he said.

Alonso, facing pointed questions about the incident at the team news conference, said he had been told by the team to wait for a gap in traffic and saw nothing unusual in doing so while his engineer counted down the seconds.

“Every qualifying we stop and we wait,” he said. “Sometimes 10 seconds, sometimes five, sometimes 45 as with the first stop today.”

Hamilton, whose relationship with Alonso has been distinctly edgy since he started beating the 26-year-old champion, disagreed openly with the Spaniard.

Asked how much more time he would have needed to cross the start/finish line before the end of the session, Hamilton said: “About the same amount of time I was held up in the pitstop.

“I really don’t understand why I was held back. So I guess you should ask the team and I definitely will do when I go back and have a debrief.” .

Ferrari’s Felipe Massa, who is third in the championship and 11 points adrift of Hamilton, will start 14th after a pitlane misunderstanding left him without fuel.

Ferrari and McLaren have won all 10 races this season, with Alonso and Raikkonen having three wins apiece, and Hamilton and Massa getting two each. 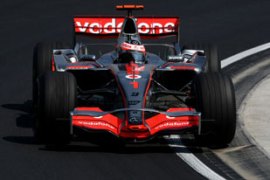 Fernando Alonso finishes the free practice session ahead of the pack.