Johndroe cited recent assaults by “extremist” armed groups on the Lebanese army, the assassination of a key anti-Syrian figure in Lebanon in June, and reports that Syria’s allies and proxies in Lebanon may be preparing an alternative government.
Assets frozen Syria held a dominant position in Lebanon from the time its forces and security agents were invited into the country in 1976 during Lebanon’s civil war.

Damascus pulled its troops and security officers out of Lebanon in April 2005, two months after widespread protests called for Syria to withdraw in the wake of the assassination of Rafiq al-Hariri, a former Lebanese prime minister.

Bush’s order said threats against Beirut’s government and moves to restore Syria’s former dominant influence in Lebanon would “contribute to political and economic instability in [Lebanon] and the region and constitute an unusual and extraordinary threat to the national security and foreign policy of the United States”.
The order called on the treasury and state departments to determine who can be seen “undermining Lebanon’s democratic processes or institutions, or contributing to the breakdown of the rule of law in Lebanon”.
They are also to assess which individuals or groups are “supporting the reassertion of Syrian control or contributing to Syrian interference in Lebanon, or infringing upon or undermining Lebanese sovereignty”.
The order prohibits US citizens from doing business with people officially identified as threats to Lebanon.
It says the international financial system will be informed of the identities of such individuals. Tony Snow, the White House spokesman, said: “We want to make a clear statement about those who are involved in trying to undermine the democratically elected government of Lebanon.”
Targeting Iran
The decree comes a month after Bush imposed a US travel ban on Syrian officials and Lebanese politicians whom the US accuses of fomenting instability in Lebanon.

Tom Casey, state department spokesman, said the new order lends Bush greater authority, “specifically to focus on those who pose a direct challenge or a direct threat to democracy in Lebanon”.

Casey said that Iranian interests could also be affected by Bush’s latest order.
“Certainly Iran and Syria are the principle sponsors, I would say, of both efforts to undermine the government in Lebanon and efforts to promote militia violence … and the other things we’ve talked about in Iraq,” he said.
“So to the extent that those countries are engaged in supporting those kinds of negative activities, then, yes, it’s very much directed against them and their unhelpful efforts.”
Iran has been repeatedly accused by Washington by interfering in Lebanese affairs through Hezbollah, a Lebanese party and resistance movement that receives financial assistance from Tehran.
Syria is also suspected of supporting Hezbollah.
The Lebanese government has been in a state of paralysis since the Hezbollah-led opposition pulled its cabinet ministers out of the government in November last year.
A series of pro-opposition public protests took place in the wake of Hezbollah’s decision to withdraw its cabinet members.
Source: Al Jazeera, News Agencies 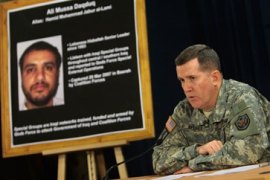 US accuses Iran and Hezbollah

The military says they helped militants carry out an attack in Karbala in January. 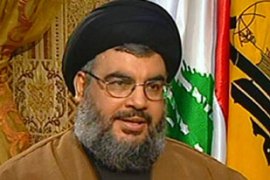 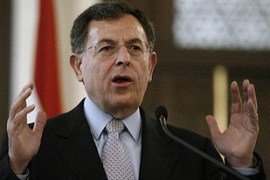