“It’s clear we have to adjust to the time change,” Rijkaard said.

“Things will get better little by little. You have to work to adjust after a trip like this. It’s normal that you’re not on top of things the first day.”

Not all members of the squad believe the tour is the best way to prepare for a season where the club will attempt to take the Spanish crown off Real Madrid, their fierce rivals.

Zambrotta and Lilian Thuram, defender, had said earlier in the week it would be better to stay home and train rather than play three exhibition games in Asia.

After Sunday’s match, Barca plays the Yokohama Marinos in Japan followed by a match in Hong Kong against a Mission Hills Invitation XI, made up of players from two Hong Kong clubs.

The club finished second to Real Madrid and failed to win any major trophies.

But Rijkaard defended such tours.

“It’s something you see that goes on with all these big clubs, doing tours,” Rijkaard said, clearly keeping the club’s money men on side.

“For Barca there is something added, transmitting the culture of the club. It’s a combination of physical preparation and doing publicity for the club and, up to now, it’s been OK.”

Rijkaard said the players would also have serious training sessions along with the exhibition games.

“You have to get the most out of your training time here,” he said.

“We will see that the club practices.” 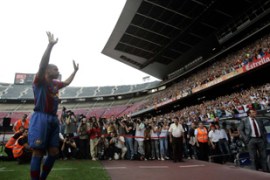 Yeras of pursuit are over for the Catalans as Thierry is unveiled at the Nou Camp.