“At least 12 people, mostly children and women, died of rain-related incidents in the last 24 hours,” Surendra Srivastava, a police spokesman in Lucknow, the capital of the north Indian state of Uttar Pradesh, said on Friday.

With rivers bursting their banks along the fertile plains south of the Himalayas, India ordered the army to help evacuate people from some of the worst-hit areas.

Some 14 million people in India and five million in Bangladesh have been displaced or marooned by the flooding, according to government figures.

At least 132 people have died in recent days because of the floods in India and 46 more in Bangladesh.

About 100,000 displaced people were staying in government relief camps in Assam, while hundreds of thousands more sought shelter on higher ground, setting up makeshift dwellings.

Millions of people have been cut off from the rest of the country.

The floods have destroyed crops worth hundreds of thousands of dollars in Uttar Pradesh, Diwakar Tripathi, a senior government official, said on Thursday.

The monsoon season in South Asia runs from June to September and is vital to the region’s agriculture.

But the monsoons are always dangerous; last year more than 1,000 people died, most by drowning, landslides, house collapses or electrocution.

Medical teams were trying to visit different regions by boat to make sure there were no outbreaks of waterborne diseases like cholera. 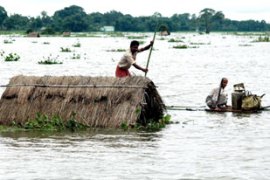 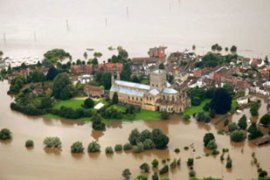 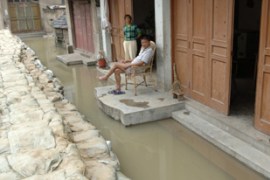