However, the side came under heavy criticism from local media over the team’s defensive tactics during the Asian Cup.

The side failed to score in their last three matches, forcing penalty shootouts on each occasion.

“People are talking about problems with his tactics but they’re the same ones we used when Gus Hiddink was coach. We are the problem, not the coach,” Lee said.

“This is not just the coach’s responsibility. Rather, it’s ours.”

The KFA is scheduled to hold a meeting on Tuesday and discuss its strategy for finding a replacement. 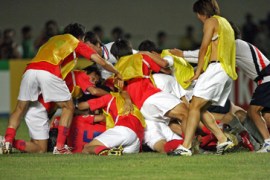 Koreans win 6-5 against Japan in their third penalty shoot out of the Asian Cup.