The report said: “Interviews with both flight surgeons and astronauts identified some episodes of heavy use of alcohol by astronauts in the immediate pre-flight period, which has led to flight safety concerns.”

The panel did not say when the two cited incidents in which Nasa astronauts were cleared to fly despite indications they were drunk took place or name the astronauts involved.

However, it was revealed that one of the incidents involved a space shuttle flight that ended up being postponed for other reasons, and the other involved a Russian Soyuz spacecraft going to the International Space Station.

“We don’t have enough data to call it alcohol abuse,” Colonel Richard Bachmann, panel chairman and commander of the Air Force School of Aerospace Medicine, said, offering few details of the two cases.

Bachmann, speaking at a news conference on Friday, said: “We have no way of knowing if these are the only two incidents that have ever occurred in the history of the astronaut corps or if they are the tip of a very large iceberg.”

The release of the report comes as part of a bad week for Nasa, which also announced that computer equipment bound for the international space station had been deliberately damaged.

On Friday, the US House of Representatives science and technology committee called an oversight hearing for September over the report, calling it a “wake-up” call.

Mark Udall, House space and aeronautics subcommittee chairman, said: “We need to understand what happened and why, whether anyone is going to be held accountable, and what the agency is going to do to fix these apparently deep-seated problems.”

The report, one of two submitted to Michael Griffin, the head of Nasa, said the US space agency must fix “ingrained and long-standing” cultural and structural problems that may contribute to behavioural problems by astronauts.

Nasa officials said they were unaware of any incidents in which astronauts were intoxicated prior to flight.

Shana Dale, Nasa deputy administrator, said Nasa would conduct its own investigation to try to confirm whether the incidents occurred and the scope of the problem.

She said: “Alcohol use in regard to spacecraft or aircraft – and anybody that’s impaired – is not going to be tolerated by this agency.”

Officials said Nasa would make more explicit its policy that astronauts are banned from drinking 12 hours before a flight and must not be “under the influence nor the effects of alcohol at the time of launch”.

The 12-hour rule was previously stated explicitly only in regard to flying T-38 training jets, not space flights. 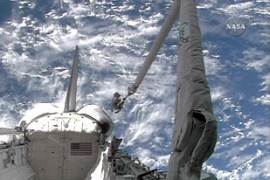