During the war, Hezbollah fired almost 4,000 rockets at northern Israel despite a full-scale ground, sea and air offensive by Israel.

Public support for Ehud Olmert, the prime minister, fell due to the country’s performance during the fighting and he too is facing pressure to step down.

A government inquiry submitted a preliminary report on April 30 severely criticising all three senior officials and Olmert. The report blamed the premier for making hasty decisions and failing to set out attainable objectives.

A successful attack by Hezbollah on an Israeli missile boat, killing four sailors, has been questioned. Israel did not believe Hezbollah had the weapons to attack its ships, so the navy did not activate its on-board anti-missile system.

The commission is expected to submit its full report by early next year, and the missile boat incident is likely to be considered, with negative conclusions about the navy command drawn.

Ben Bashat, 53, joined the navy in 1969. He served as defence attache in Singapore and graduated from the Newport Naval War College, according to his official biography. 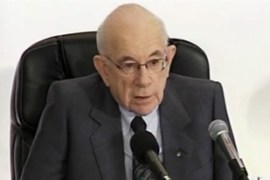 Prime minister admits “mistakes were made” but says he has “no intention of resigning”.