Dhia said that 25 of those wounded had serious injuries, including severe burns.

The bombing in Hilla came hours before the US ambassador to Iraq and his Iranian counterpart met in a second round of face-to-face talks aimed at controlling Iraq‘s violence.

Hilla, about 95km south of Baghdad, has been the site of some of the deadliest bombings in the country, including a double suicide attack on 6 March that killed 120 people.

The attack came a day after at least 16 people died when four car bombs rocked the centre of the capital.

Police, morgue and hospital officials reported a total of at least 59 people killed or found dead nationwide on Monday, and the American military announced the deaths of three soldiers and a marine.

One of the suspects was a foreign fighter suspected of involvement in a suicide truck bomb attack on a police station in the town of Samarra on 6 May which killed 12 Iraqi patrolmen and partially demolished the building.

“We’re continuing to hunt down those who terrorise the people of Iraq. Criminals and foreign terrorists have no place in the future of this country,” Major Marc Young, a US military spokesman, said. 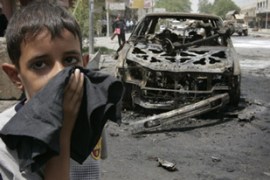 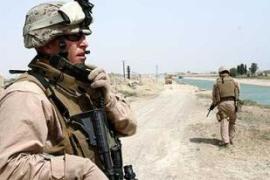