This week, at least 40 people died in storms in Shandong province in the east, and four women were killed when a wall collapsed in Zhejiang on Saturday after heavy winds and rain.

China’s third longest river, the Huai, is heavily swollen and has prompted tens of thousands to leave their homes.

The river is expected to stay dangerously high for at least another 10 days.

Rains destroyed more than 4,000 houses and damaged thousands of hectares of crops. A 176km highway linking Tengchong county in Yunnan and Myanmar had been cut by mud-rock flows.

Forecasts say that heavy rain will continue to hit large areas of China through the weekend, including the Huai river basin.

Rains during the past few days had caused a further 133,000 ha around the river to be flooded, bringing the total flooded area to 254,000 ha.

“Currently 182,000 people in Anhui are working to control flooding in the Huai,” Xinhua said.

“Leaders warned local people to be on alert for lightning strikes and rainstorms and companies to ensure safety especially in construction sites.” 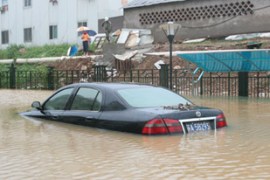