Al Jazeera continues its series of reports on Turkey ahead of Sunday’s general elections as Jonathan Gorvett takes a look at the role political satire has played in the election campaign.

For some Turks, Aliye Ozturk, is, as candidates for their country’s presdiency go, their worst nightmare.

She has Kurdish origins and wears a headscarf. She has Armenian roots, arousing deep historical suspicions, while her background as a member of Turkey’s minority religious group, the Alevis, is likely to be the final straw for many of the country’s more conservative Sunnis.

She has promised a programme of sweeping reforms, has pledged not to appear on TV and has vowed to take issue with Angela Merkel, the German chancellor, over the German leader’s dress sense.

If elected, Ozturk will serve Turkish pizza at the presidential palace and provide visiting European ambassadors with CDs of Ottoman military marches.

She is, of course, entirely fictitious.

Ozturk is the brainchild of the Young Civilians, a group of Turkish youth opposed to the military’s role in politics.

Yidiray Ogur, spokesman for the group, says their candidate “is kind of the photographic negative of Turkish state secularism”.

“We have put her poster up around Istanbul and Ankara and many people have called asking to interview her,” he says.

The spoof campaign has shown Turkish political satire is very much alive and well, as Turks head to the polls on Sunday. Indeed, it may be stronger than ever.

Ferhat Tumer, the creative director of the Cocuklar advertising agency which produced a television advertisement endorsing Ozturk, says “basically, people in this country are really bored with the same old arguments”.

“For the last 50 years, for example, people have been arguing about whether someone wearing a headscarf is a threat,” Tumur says. “Whether wearing one or not wearing one should be a reason for being admitted to university or not.”

“Isn’t that just comic? I mean, come on – when we need better education, health services and a stronger economy, this is what we get. It’s comic!”

Tumer’s agency produced the advertisement “Original Democracy”, which recently aired on Turkish television, and it has also been successful on YouTube.

The advertisement’s narrator speaks rapidly, in the style of a salesman, exhorting listeners to “throw away unreliable systems that crash easily” and choose “original democracy”.

He promises the system allows listeners to “style your hair and trim your beard any way you want to – plus it is easy to use and comes with a full constitutional guarantee”.

But the humour is based on serious concerns.

On April 27, Turkey’s politically powerful military issued a warning on its website over attempts by the ruling AK party to have Abdullah Gul, the foreign minister, elected as president.

The military’s warning sent a shockwave through the Turkish political system, forcing a government climbdown and the calling of early parliamentary elections.

The warning also brought back memories of several earlier coup d’etats launched by the generals. Since a multi-party system was first introduced in Turkey in the 1950s, there have been coups in 1960, 1971, 1980 and 1997.

Ogur said: “There was a headline in the newspaper Cumhuriyet back in April saying that ‘Young Officers’ were concerned about developments. We took our name, ‘Young Civilians’ from that.”

“We held a demonstration against the ‘e-coup’ or internet coup, as it’s been called, and since then the group has sort of taken off.”

Turkey had seen several large demonstrations previous to this, launched by supporters of the military and by secularist Turks who claimed the government was plotting an Islamist take-over.

“The editor of the newspaper Radikal called us in,” recalls Tumer.

“At that time there was very high tension in society caused by these ‘republican’ demonstrations. The editor wanted us to help him do something about this. The meetings and the tension were polarising people, forcing them to choose – are you on the side of secularism and the republic’s founder, Ataturk, or are you an Islamist?

“But people can be both democratic and secular, have religious faith and support Ataturk. We didn’t like this situation of forcing people to take fake sides.”

Humour and satire have long been the tools with which Turks have dealt with their political situations.

In Ottoman times, the shadow puppets Karagoz and Hacivad were often used to lampoon rulers.

Later, satirical magazines flourished, the most recent of which, Leman, was notorious for showing Recip Tayyip Erdogan, the current prime minister, as a variety of different animals. 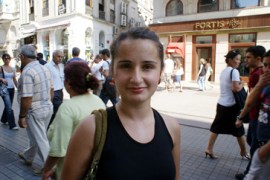 Al Jazeera asks Istanbul’s youth what they expect from the country’s new government. 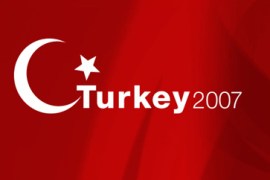 A look at Turkey’s elections and what the results mean. 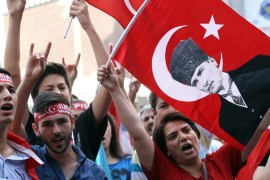