“It’s like losing part of my childhood,” said William Bishop, 16, dressed as Harry Potter complete with a scar on his forehead.

In Sydney, about 1,500 Potter fans boarded two steam trains from the city centre to a secret destination where bookstore staff were preparing to hand out copies of the book.

Musicians and performers with pet rats, lizards and snakes entertained excited trainloads of children and their parents, most of them dressed as characters from the books.

On Friday, one fan had to be rescued from a lake in Canberra, Australia’s capital, after he dived in to rescue a pre-purchase receipt necessary to pick up his copy of the book.

In Asia, all-night parties and Hogwarts Express-style train trips were among hundreds of events held and planned for the  weekend.

In Pakistan, police said they had defused a car bomb the previous night outside a packed shopping centre in Karachi where the book was scheduled to be launched.

“Had it exploded it would have caused a huge loss of lives,” Manzoor Mughal, Karachi police chief said.

In Mumbai, children tried to guess what would happen to Harry after Rowling said last year that at least two main characters would die by the end of the seventh book.

“I have a bet with my friends that Harry is not going to die,” said Abhigyan Jain, a young fan dressed as a Death Eater.

The excitement comes despite a series of plot leaks on the internet, and a mistake by a US online retailer meant as many as 1,200 copies were sent to buyers days ahead of publication.

Rowling, 41, said she was “staggered” when two US newspapers ran reviews of the book on Thursday, and France’s Le Parisien, on Friday, published a short summary of the final book’s epilogue, printing it upside down to give readers a chance to look away.

The leaks and spoilers have been a major headache for Potter publishers, who spent millions of dollars trying to keep the book’s contents a secret.

Eve Lawrence, 25, a Potter-maniac and UK expatriate in Qatar said, “Friends have teased me about Harry dying in the last chapter. They don’t understand the escapism he brings. I have seen the latest film and I am going to the UK tomorrow to pick up my copy.”

Only 13 years ago she was an unemployed single mother, without a publisher or agent, but is now the world’s first US dollar billionaire writer after the success of her first six novels and the Hollywood movies based on them.

The first six books, starting with “Harry Potter and the Philosopher’s Stone” in 1997, have sold 325 million copies and the first five movies in the film franchise have amassed around $4 billion at the global box office. 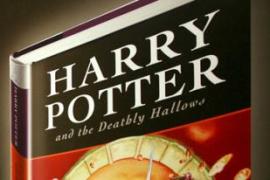 Final Harry Potter book goes on sale in a few hours time amid hysteria and fanfare.