His lawyer said Thomas was only following orders and he blamed repeated bomb blasts for impairing his judgment.

Thomas faces a maximum sentence of life in prison, according to his lawyer, Victor Kelley.

He was also convicted of kidnapping but acquitted of premeditated murder, making a false statement and housebreaking.

Prosecutors said that during a night-time patrol on April 26, 2006, Thomas’s squad hatched a plan to kidnap and kill a suspected insurgent from his house in the town in al-Anbar province.

When they could not find him, they kidnapped Awad who lived nearby, instead.

Others accused in the case have testified that several squad members took Awad to a ditch and shot him to death. 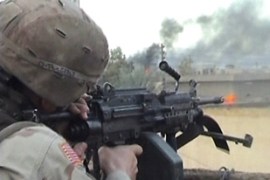 US marine admits to Iraqi’s murder

Servicemen killed Iraqi because they were “sick and tired of getting bombed”.