She said: “Brothers were allowed to rape sisters, men were disemboweled  and their parts displayed at check points. Cutting of limbs of  unarmed civilians were common.
“Children were forcibly taken away from families, fed with drugs  and turned into child soldiers.”
‘No remorse’
Alex Tamba Brima and Santigie Borbor Kanu were each given 50-year jail terms, while Brima Bazzy Kamara received 45 years.
The court convicted all three in June on 11 counts of war crimes and crimes against humanity including terrorising civilians, unlawful killings, rape, lootings, abductions and forced labour.

The three men were leaders of the Armed Forces Revolutionary Council (AFRC), a junta that overthrew an elected government in 1997 and was removed from power by a Nigerian-led peacekeeping force the following year.

The ruling marks the first time an international court has issued a conviction on the conscription of child soldiers, who in Sierra Leone were often drugged and forced into battle.

Announcing the unanimous verdict of the three judges, Sebutinde said none of the defendants had expressed genuine remorse.

Corinne Dufka, a senior researcher for Human Rights Watch, said: “The AFRC committed unspeakable horrors against civilians throughout the towns and villages of Sierra Leone.

“Today, the victims of these crimes have seen justice served; tomorrow, future perpetrators have been put on notice that wars have rules, and they must be respected.”

The special tribunal was set up following the end of the diamond-rich country’s 10-year conflict in 2002 to prosecute war crimes.

About half a million people died during the fighting, victims of systematic mutilation in which rebels raped, pillaged and cut off the limbs of thousands of civilians.

Some critics say the special court is working too slowly.

It has only charged 12 people, including Charles Taylor, the former Liberian president, who supported Sierra Leonean rebels and is on trial in The Hague.
Source : News Agencies 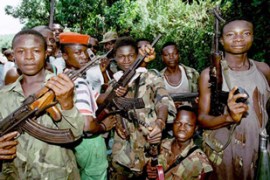 Three Sierra Leonean rebel commanders, who led fighters to commit atrocities in that country’s civil war, are being charged with personal complicity in crimes that claimed 50,000 victims.

Three suspects in a landmark war-crimes trial in Sierra Leone have appeared before a UN-backed court, accused of masterminding one of modern Africa’s most brutal wars.