It was unclear whether the attack was related to the backlash against the mosque raid – in which the government says 102 people were killed – or was linked to a long-running separatist movement in Baluchistan.
Abdullah Jan Afridi, the most senior officer at Hub Chowki police station, said the killed policemen had been escorting a team of Chinese engineers travelling to Karachi when the blast occurred, although the vehicle carrying the Chinese had just passed by.
He said: “The blast took place shortly after Chinese passed the area. All seven policemen in the vehicle have been killed.”
Tariq Khosa, provincial police chief, said the blast was caused by a suicide car bomb.
Speaking to AFP news agency, he said: “The bomber driving a Mazda car blew himself up near the convoy.”
Tribal attacks

In the far northwest, a suicide bomber blew himself up at a police training centre in the city of Hangu, killing at least seven people.

The bomber tried to get into a police centre early on Thursday morning when young recruits were going in for training.
Fakhr-e-Alam, the city’s chief administration official, said: “The attacker tried to crash through the gate. He blew himself up as security guards at the gate tried to stop him.
“Six policemen and a passerby were killed.”
A police official said 13 people were wounded.
Tribal fighters in North Waziristan last week vowed to attack security forces after abandoning a 10-month peace pact with the government which it said the government violated.
At least 16 Pakistani soldiers were reported to have been killed one day before, in an ambush against a military convoy near the Afghan border.
And on Tuesday, a suicide bomb had killed 16 people and injured 86 others at a rally in support of the country’s chief justice.
‘State of emergency’
The spate of attacks prompted the government to consider imposing a state of emergency on Wednesday. But Pervez Musharraf, the Pakistani president, later ruled out declaring an emergency.
“The president was asked whether an emergency would be imposed because of the growing violence and the president clearly said it would not,” said a senior government official, citing the president in talks with newspaper editors.
An emergency would mean the postponement of elections due around the end of the year. Musharraf has repeatedly said elections, including a bid by him for a second term, would be on time.
Source: News Agencies 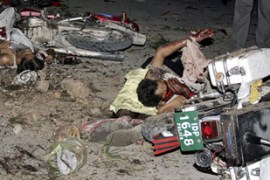 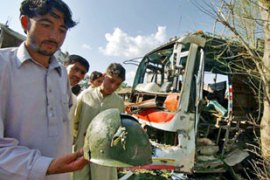 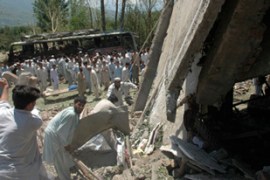