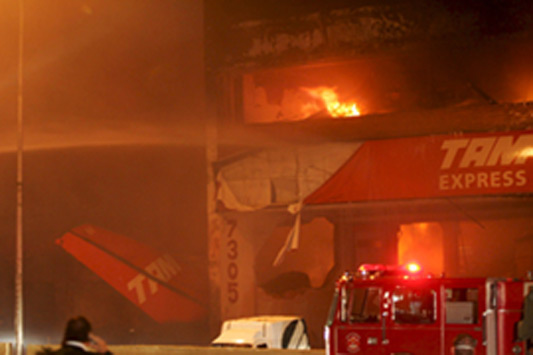 Brazil is observing three days of mourning after nearly 200 people were killed in the country’s worst-ever air crash.

Rescue workers were pulling dozens of charred bodies from the site of the crash where a passenger jet burst into flames at Sao Paulo’s Congonhas airport, killing about 195 people on board and on the ground on Wednesday.

Stunned and shocked by the enormity of the accident, Luiz Inacio Lula da Silva, the Brazilian president, ordered the period of national mourning.

The TAM airlines Airbus-320 was en route to Brazil‘s busiest airport from Porto Alegre in the nation’s south on Tuesday when it skidded on the rain-slicked runway and across a busy road and hit a petrol station and TAM building.

On Wednesday, the airline raised the number of people aboard the plane by four to 180 and officials said the chance of finding survivors was near zero.

The runway at Sao Paulo‘s Congonhas airport has been repeatedly criticised for its short length, and two planes slipped off it in rainy weather just a day earlier, though no one was injured in either incident.

The airport is ringed by heavily populated neighbourhoods.

The TAM flight was landing on Congonhas’ 6,362 feet-long Runway 35, which was recently resurfaced but not grooved, which would provide better breaking in rainy conditions. There were plans to regroove the surface by the end of July.

Because of its short length, Congonhas is known among pilots as the “aircraft carrier”. They are instructed to touch down in the first 1,000 feet of runway, or do a go-around if they overshoot the immediate landing zone.

Eyewitness Elias Rodrigues Jesus, a TAM worker, told The Associated Press he was walking near the site when he saw the jet explode.

“All of a sudden I heard a loud explosion, and the ground beneath my feet shook,’ Jesus said. “I looked up and I saw a huge ball of fire, and then I smelled the stench of kerosene and sulphur.” 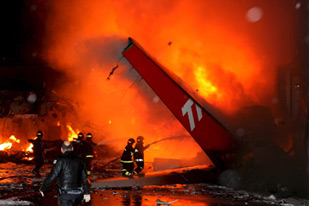 Jose Serra, Sao Paulo’s state governor, said the hopes of finding any survivors in the plane “are practically nil”, since the temperature inside reached 1,000 degrees (1,830 Fahrenheit).

A Brazilian congressman, Julio Redecker, was among those on the flight, but an aide did not know whether he was dead or injured.

The airline released a list of most of the people on the flight early on Wednesday, but did not specify the nationalities.

Al Jazeera’s Gabriel Elizondo said the jet crossed a busy road before hitting the petrol station with employees inside.

Dozens of ambulances raced to the crash site just outside the airport and television images showed the jet’s tail sticking out from a building in flames as more than 200 firefighters tried to put out the blaze.

Congonhas airport – the largest domestic hub in the country – was closed to air traffic and all streets around it were closed by police.

Buildings nearby were evacuated and masks were distributed because of the thick smoke. A power cut at the airport hampered rescue efforts.

Tuesday’s crash came 10 months after Brazil‘s deadliest crash, a collision between a Gol Aerolinhas Inteligentes SA Boeing 737 and an executive jet over the Amazon rainforest.

All 154 people on the passenger jet died while the executive jet landed safely.

Controllers have engaged in strikes and work slowdowns to raise safety concerns, causing or exacerbating lengthy delays and cancellations.